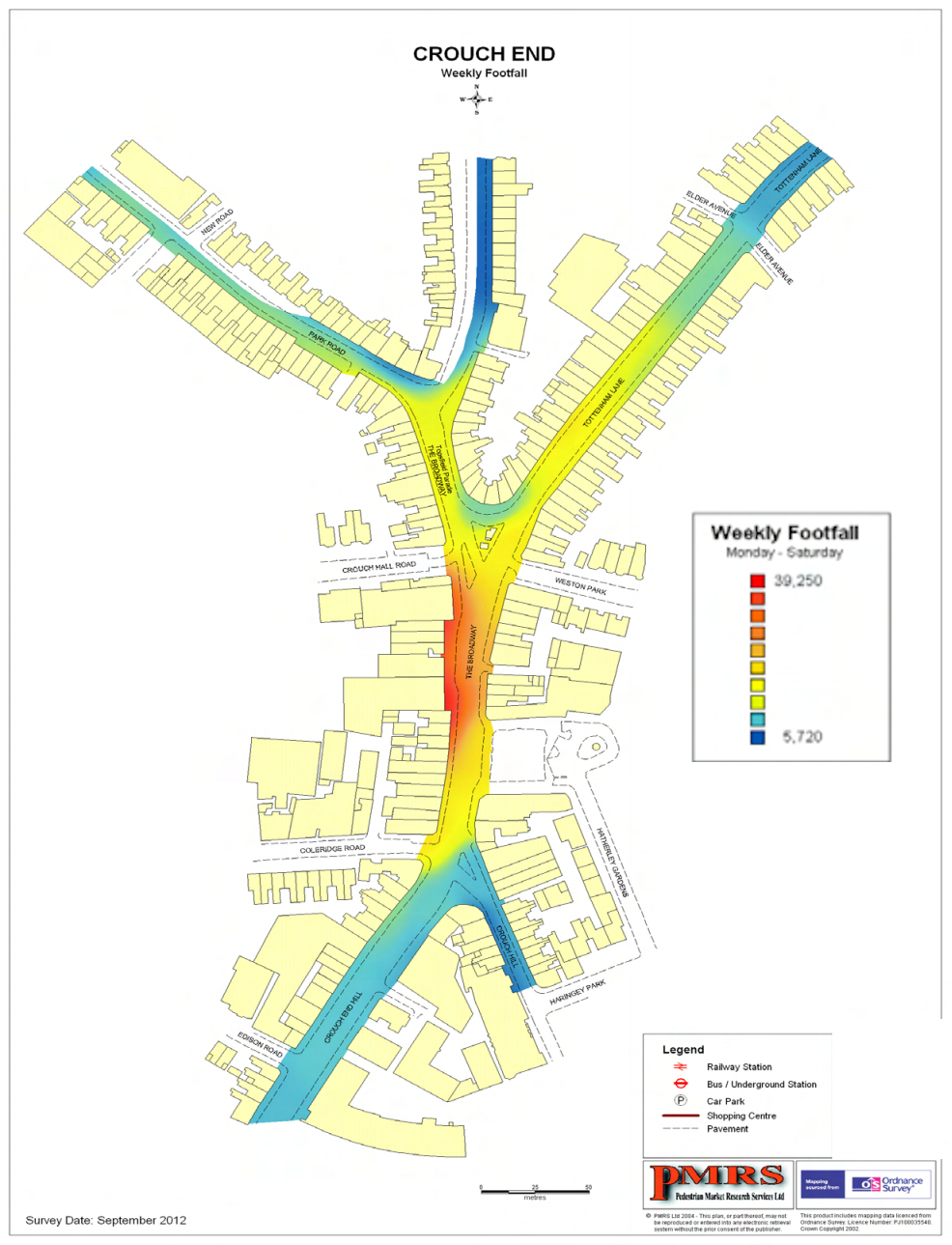 We published on this site not long since a blog setting out a rate of shop closures in Crouch End greatly increased when compared to recent years. Despite the short time that has passed we have since then seen Heirloom and Jerkmaica close, so that we now have a run of three empty restaurants (Here being the third) in close proximity.  The Margot London Beauty Clininc on Coleridge Road has closed, displaced by the expansion of the next door nursery. Nurseries do seem now to be on the up, remember that it is proposed that the Earl Haig Memorial Hall become another. Of Special Interest has retreated to  the corner unit and the Planet International estate agency will expand into the vacant space. has closed.

On the brighter side , if the whispers are to be believed, Jerkmaica is becoming a Vegan bar/restaurant, we’re told Starbucks will be a Holland & Barrett, Cannon’s restaurant is now labelled Greek Kitchen, there’s a planning application in for a dental surgery at the ex-Salon Seventy-Two on Crouch End Hill, Heirloom is rumoured to be a seafood restaurant, the vacant unit on Park Road is due to become a grocers, Kiss the Sky is transforming into a new bar/comedy venue.

What we very clearly observe is that the rate of turnover of premises occupancy has previously been stable in Crouch End but this year has suddenly shot up. At some level this is healthy, but if too high it’s called ‘churn’ and considered unhealthy.

A list of possible causes of ‘churn’ would include:

This can’t possibly be an exhaustive list, but perhaps it’s a place to start. And it does no harm from time to time to state the perfectly bleeding obvious, if we don’t have that at the forefront of our minds we will be forever looking in dark obscure corners for solutions that quite likely don’t exist.

So how might we address these causes of churn. Be aware that this is not a statement of Forum policy, this is a blog, which might solicit comment, support, opposition, new ideas and refinements. Please.

Does a Neighbourhood Forum have any right or ability to interfere with rents? On the face of it , none at all, but we have heard of a scheme using social media to share information. If all the commercial tenants share information about what rent they are paying, then new tenants can compare. Is this rent being bumped up compared to shops nearby? Estate Agents claim to look at comparators, but mainly in order to ask a bit more for the landlord they are representing right now. Might it be the slightest bit possible to form a tenants’ union, and refuse to pay more than the shop next door. And the Forum’s role? We did begin a database of asking prices in the area. Perhaps we should update it and put it on Facebook? This probably does not form part of our policy.

Business rates are under the control of local and central government. A  neighbourhood forum can do little to address them except keep reminding the local authority of the problems they cause. Luckily both contenders for the Conservative leadership have promised to improve things on this front.

A SURPLUS OF SHOPS

Can the Forum do anything about the surplus of shops? Other neighbourhood plans have attempted to manage the ratios of different types of shops insisting that there must be the right mix of retail, office, restaurant and others. The attempt to insist on these ratios seems largely futile. because

a) national policy at the moment is adaptive which means, roughly, that almost anything goes and

b) such policies exist already higher up the planning policy chain, and are dishonoured at least as much in the breach as in the observance.

But it might be possible to do something in the way of policy to reinforce national and local authority policy and to create zones centering on the clock tower. A central zone might be set to contain a preponderance of retail, with the periphery allowed, even encouraged, to follow the adaptive policies of the higher ups. A heat map of footfall in Crouch End might be a useful guide. The map at the head of this article dates back to 2012, but one guesses that little has changed. It is town centre focussed and shows quite clearly that there is a very marked concentration around the central supermarkets but that footfall diminishes very rapidly as one walks (or perhaps doesn’t) away from the Clock Tower. It finishes at the edges of what was then thought of as the shopping centre.

So if we proceed from the Clock Tower along Tottenham Lane we find that footfall is greatly diminished beyond Elder Avenue. The Haringey produced shopping centre map goes no further, but walking up to Roseberry Avenue we can see that beyond that point the nature of the street changes. The Picturehouse, the Arthouse, The YMCA and the petrol filling station have little to do with retail. What is proposed for the new builds (Printworks (already built), Kwik Fit and the former petrol filling station beyond the Arthouse) are mixed use developments with shopfronts at ground level. But would it make more sense to have a policy which allows these units to become something else? Market forces and adaptive policy have already allowed what was planned as a revived Kwik Fit on the old site to become a gym.  Would the ‘shop unit’ in The Printworks (where somewhat unexpectedly, all 9 dwelling units are still marked as available) be better as a co-working space, or a solicitors’ or possibly even affordable housing. The same question applies to the ground floor beyond the Arthouse. A suitable policy might encourage alternative uses.

We have to ask though, would this be fair to the parade of units by the 91 bus stop? If our logic is correct then the answer is yes. Co-working units, for example, in the new builds, would have a population of workers who will need a café for lunch, and a convenience store for occasional purchases. Footfall will improve for the ironmongers and the restaurant and the fast food outlet. And so on.

Look again at the footfall map. Middle Lane rapidly becomes dark blue, i.e.  at the bottom end of the footfall scale. It may also soon be subject to an element of pedestrianisation under the Liveable Crouch End scheme. A policy for this stretch which allows non-retail uses might well bring about constructive changes. Could Haberdashery become a pavement cafe?

So a local policy that reinforces policies from higher up the planning food chain might well be in order.

How does this tie in with a Neighbourhood Forum’s role as champion of localism? The Forum has been collecting opinions from Crouch Enders for several years. Here are two examples from local businesses:

Local Policy is one thing and then there are forces beyond our control. Let us hope that a 60 room hotel and a thriving Arts Centre in the building formerly known as Hornsey Town Hall should encourage a few more feet to fall in the area. And if as a result of the policy difficult-to-let edge-of-town shops become easy-to-let something elses, then there will be a larger population of potential shoppers. Landlords should be pleased too.

Shopkeepers will still have to deal with the rival attractions of the giant online retailers, and the seductive lures of Brent Cross and Westfield, but if there are more people around, for more of the time, they might stand a better chance.

CROUCH END IS NOT LOVELY

A judgment you may not all agree with, but it could be lovelier. We think the reworked Town Hall Square will be an improvement over what is there now, with (a double edged sword , this) an enhanced food and beverage offering.

And the Liveable Crouch End project promises , inter alia, cycle paths, wider pavements, piazze (is that the plural of piazza), improved street furniture  – altogether much more liveable/loveable. This is an element of policy that has been decided at a higher level than Crouch End, being a conspiracy between Transport for London and the London Borough of Haringey, but the Forum is as involved as it is allowed to be in the development of the project, and hopes to be able to nudge it in the right direction.

It should also be noted that the Forum will have some influence over the expenditure of the Community Infrastructure Levy, but only after a careful consultation with the public (watch this website for more details). Perhaps the outcome of some of this may be increased loveliness.

PLEASE ADD YOUR FEEDBACK IN THE COMMENTS SECTION BELOW.