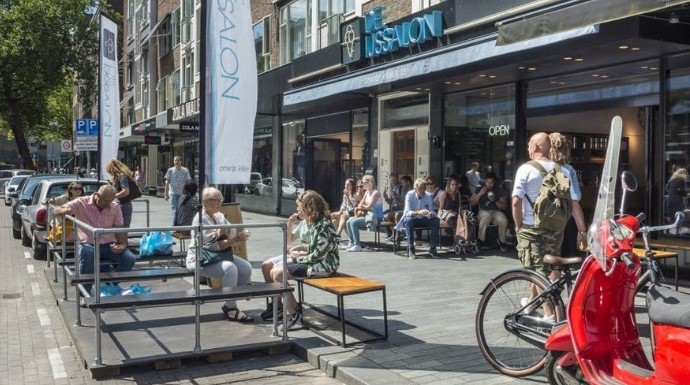 For Haringey announcement and update, June 2nd, see below.

We posted a couple of weeks ago about Haringey’s role in re-starting the local economy and taking steps to improve travel and the pressure is building.

In receipt of £100,000 from the DfT and £239,933 from the government’s Re-Opening High Streets Safely Fund, the council have convened a taskforce (made up of staff from Highways, Parking, Business Support, Regulatory Services and Enforcement) to identify emergency measures to reduce car traffic and bolster walking and cycling. We wish them well, they don’t have long to act: the DfT want proposals by June 5th, and the schools are beginning to return.

So, in the light of TfL’s guidance to “enable London’s economic regeneration by facilitating more walking and cycling to local high streets and town centres” by “working with boroughs to reduce through traffic”, we’ve written to the council identifying possible sites (see earlier blogs).

Is this the moment the original vision for Liveable Crouch End returns? Will the car drivers now be forced to give up some roadspace? For decades Crouch End has been designed entirely around the supremacy of private vehicles and the requirements of through traffic, and the overreaction to last year’s trial closure of Middle Lane revealed quite a few who refuse to countenance even a minor change to the status quo. Perhaps the coming gridlock will alter perceptions. 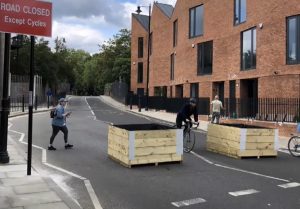 Above all, we want to see changes that allow flexible, creative and novel solutions for the local economy. So we’re calling on Haringey to be bold in their interventions, to close or filter roads if there’s a possible improvement to be made, to identify widespread opportunities for outdoor trading, and to put the local ahead of the strategic – which is the upshot of HMG guidance. After all we’re talking about pop-up solutions that can be removed (and this is an opportunity to trial changes).

Uncertainty abounds and the risk of a second wave of infections means seemingly temporary measures will be with us for some time. Being outdoors maybe fine, indoors, not so good, so it’s difficult to see how public transport will get anywhere near normal capacity anytime soon. Popping in and out the shops is okay too, but spend more time in close proximity indoors and you may have an issue. And, unfortunately, that means cafes, pubs, cinemas – and many service businesses, from hair salons to yoga studios – are in trouble.

Crouch End depends upon the service sector. Our local economy, the second largest town centre in Haringey, will be hit hard and we call upon the council to respond.

Perhaps other long term changes await us too. Will the move to home-working endure? And what would that mean for the town centre – might week-day footfall actually improve? It would be good to think so, trading has been tightening for some time.

NB. The Commonplace map for comments and ideas is here.

“Work around widening ‘pavement pinch-points’ was initially rolled out on 1 May in response to the growing need for adequate social distancing in the borough’s busier hotspots, including in town centres. The first two phases of the work saw nearly 20 sites widened and the removal of some on-street parking.

The council is now bidding for funding to support similar permanent and non-permanent measures and is also keen to support local businesses to re-open by enabling safe social distancing for residents visiting them and providing space for them to effectively trade and operate.

The council has been working on proposals to give people safe alternatives to travel around the borough through ‘active travel’ such as walking and cycling.

As part of this, the council is working on funding bids for improvements to Cycle Superhighway 1 (CS1) (external link) and to accelerate the work being done on the planned Cycle Future Route 2 – which will run from Tottenham Hale to Camden, at least with temporary measures.

East-west and north-south temporary routes are also being worked on, including Quietway 10 which would ultimately run from Bowes Park to Farringdon. The council is also bidding for new money to install new cycle parking across the borough.

Funding bids for new ‘low traffic neighbourhoods’ are also being prepared by the council in Tottenham and the Green Lanes / St Ann’s area, to reduce ‘rat-running’ – using measures such as planters, bollards, barriers and signs to discourage car use and encourage walking and cycling. The council is also bidding for speed management measures and looking at reductions of speed limits to 20mph.

This work will run alongside the council’s newly launched Commonplace Map (external link) – an interactive map that will allow residents and business owners to identify cycle routes and low traffic neighbourhoods to assist social distancing in the borough. Residents can also email suggestions to: [email protected]