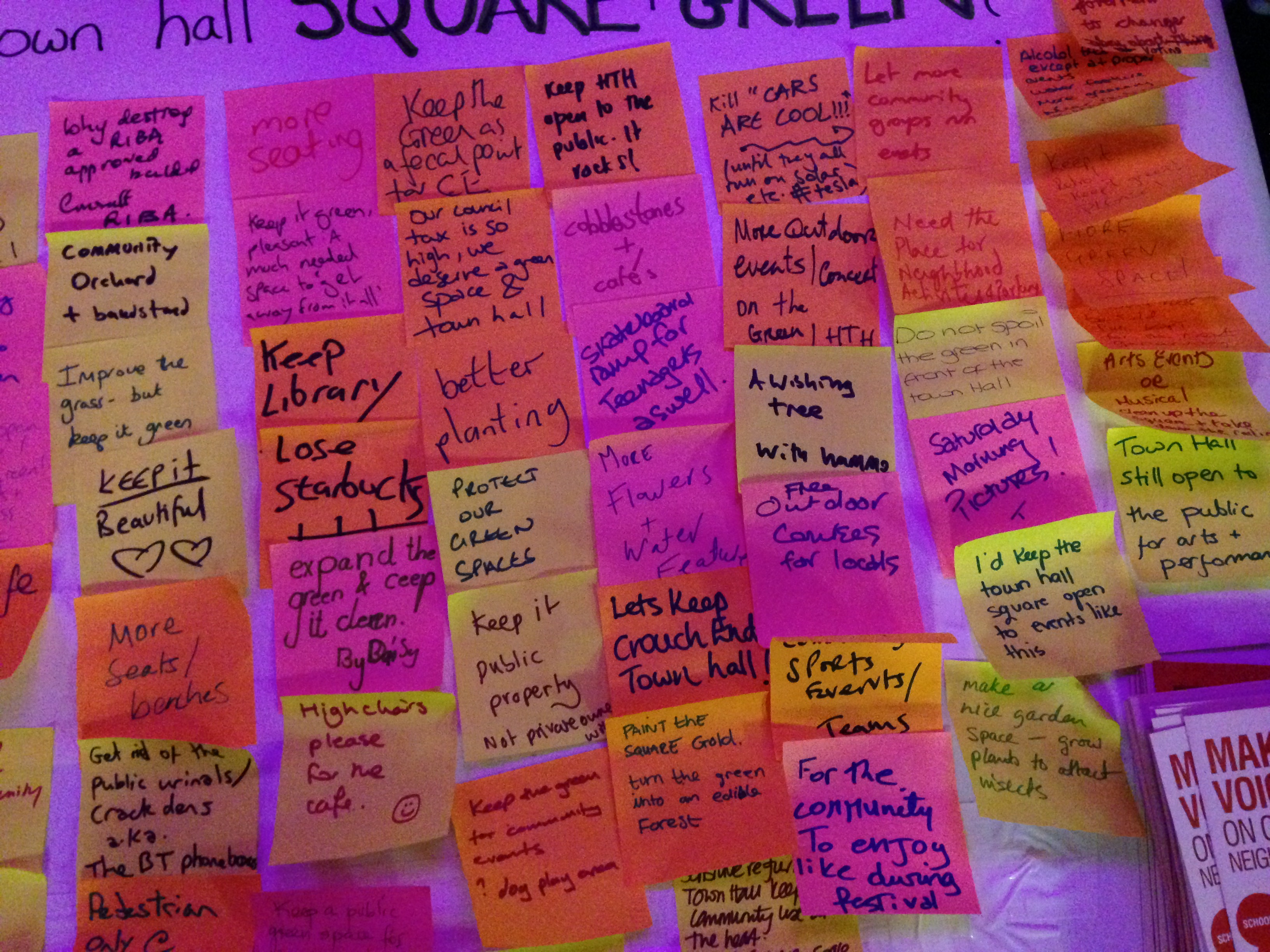 Crouch End’s Neighbourhood Forum provided a stall at this year’s Crouch End Festival. Our goal – to find out more about what CrouchEnders think. The following three questions were presented on backing paper and members of the public were invited to write their comments on paper ‘post-its’:-

In addition, visitors to the stall were invited to write further comments at specific locations on a map of Crouch End, using green stickers to say “I love this bit” and red stickers to say “This is not so good”.

The feedback we received on the stall reflects a broad variety of perspectives, some conflicting ones; however, a number of common and reoccurring themes emerged, indicating unequivocal public support for certain key issues.

Equally, the feedback provides compelling evidence of overwhelming public support for the Town Hall and Town Hall Square to remain in public use and that members of the public consider these to be valued community assets. There is widespread support to keep grass at the Town Hall Square. Others suggested better upkeep of the green and fountain, and more trees.

Visitors to the stall also showed strong support for more community events and facilities both at the Town Hall, on the Green and in Crouch End generally, mentioning the festival, the arts centre, theatre, live music and cultural events, and a space for children and families.

Other popular comments were for better management of Park Road Leisure Centre, the need for more local schools, (some proposing the Town Hall as a venue), but most emphatically, the desire for more green spaces.

In terms of traffic and transport, a great many people said they would like some degree of pedestrianisation of the streetscene with more places to sit. Many people said they thought there was too much traffic; others suggested abolishing parking restrictions. Several people mentioned electric cars and safe cycle routes. It was also suggested the pedestrian crossings should be more ‘pedestrian-friendly’.

These views were supported by comments on the map, which identified specific locations for pedestrianisation and for safer pedestrian crossings at difficult road junctions.

In terms of improving the shopping area, a clear preference was noted for local, independent shops in favour of national high street brands, the most popular suggestion being to obtain financial support to protect and attract smaller, independent shops, and to reduce rents and rates for shops generally. Several people suggested making better use of vacant retail units, for example for community projects or as pop-up shops. Several people said they would like a bookshop.

Finally, here are some of the most enterprising (but less ‘mainstream’) comments – ‘more edible plants on the green’, ‘a wishing tree’; ‘waterfalls and butterflies’; and my favourite one: ‘turn the square into an edible forest’. There can be no denying, we CrouchEnders are a creative, talented bunch with no end of innovation and interesting ideas!

So what can the Neighbourhood Forum do with these comments? First, some of these ideas can be developed into a ‘Neighbourhood Plan’ through the relevant Forum Working Groups. For example, feedback indicated support for more benches. The Working Group on Economy advises on ‘street scene’ and consultation feedback would ultimately be used by Haringey Council to allocate Community Infrastructure Levy funds to be spent accordingly.

Second, these provide vital information about local residents’ opinions and preferences, irrespective of whether or not we can act on them. All responses to the questions have been carefully noted and will be kept on record for future reference.

The Neighbourhood Forum is very much about consulting you, but we still need to recruit more volunteers to play a part. Want to get involved? Please sign up for our emails. or just get in touch at [email protected] The future is in your hands!