In the current panic over the future of the High Street, one theme often emerges – retail is on the way out (particularly the comparison shopping variety) and should they want to survive and prosper High Streets must become centres for leisure and services. We’ve blogged our surveys on this issue before, and we’re minded to conclude this diversification is precisely what is happening to Crouch End… more restaurants, more cinemas, more gyms, and more nail bars – food and beverage businesses alone now occupy 1 in 4 of units across the the town centre (9% growth last year). Well, we’re not complacent about this stuff, and if Crouch End can keep its head above water and avoid a fate of boarded up shops, who are we to complain.

But there are potential downsides, and a little consideration of the issues may well be warranted. The number of bars and restaurants (and cinemas, etc.) produce a healthy, but occasionally noisy (even antisocial?) night time economy – and the redevelopment of the Town Hall will bring further high profile attractions, with a venue, cinema, roof top bar and restaurants due to open before long.

A couple of maps were recently brought to our attention which rather underline the point. 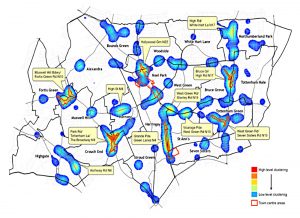 These heat maps, produced as part of the Council’s Licensing Policy Statement, show the numbers of licensed premises across the borough. This doesn’t capture everything about the evening economy as it doesn’t give extra weight to cinemas, venues, theatres or bowling alleys, but as most of those are licensed, as are restaurants – it presents strong evidence. The first map is 2012, the second 2006, so quite a few things have changed subsequently, not least in Crouch End – including the opening of the cinemas (2014 and 2015).

The conclusion and the direction of travel seem abundantly clear:  Crouch End is the most significant night time economy in Haringey and across a swathe of North London. 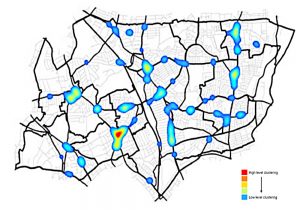 Now, we think the importance of the evening economy deserves consideration in the drawing of planning policy and future development. So the Forum were somewhat surprised to see no recognition of Crouch End’s status in the draft version of the new London Plan, within which all significant night time economies across London are graded. For instance Wood Green is given an ‘NT2’ status, ranking it alongside the night life of Islington, whereas Muswell Hill, Finsbury Park and Green Lanes are all rated ‘NT3’ meaning “more than local significance” (see table A1.1).

Yet Crouch End wasn’t mentioned at all. Zero rated, zip.

How come? Well, apparently those responsible for the London Plan rely on data provided by the Boroughs, which means of course that Haringey, for reasons we can’t imagine, think that Crouch End has no night time economy whereas Wood Green is the new West End (they have form on this, and the very mention of ‘Crouch End’ within Council documents have given rise to outraged complaints from councillors before – we suspect Haringey may be actively pursuing a policy of pretending we don’t exist).

A correction has been sought.

The new London Plan has a whole policy section (HC6) devoted to supporting night time economies (click here). Worth a read – should the Forum be considering policies to support, enhance, control or limit our evening economy? How do we see the town centre in 10-15 years time? Let us know.