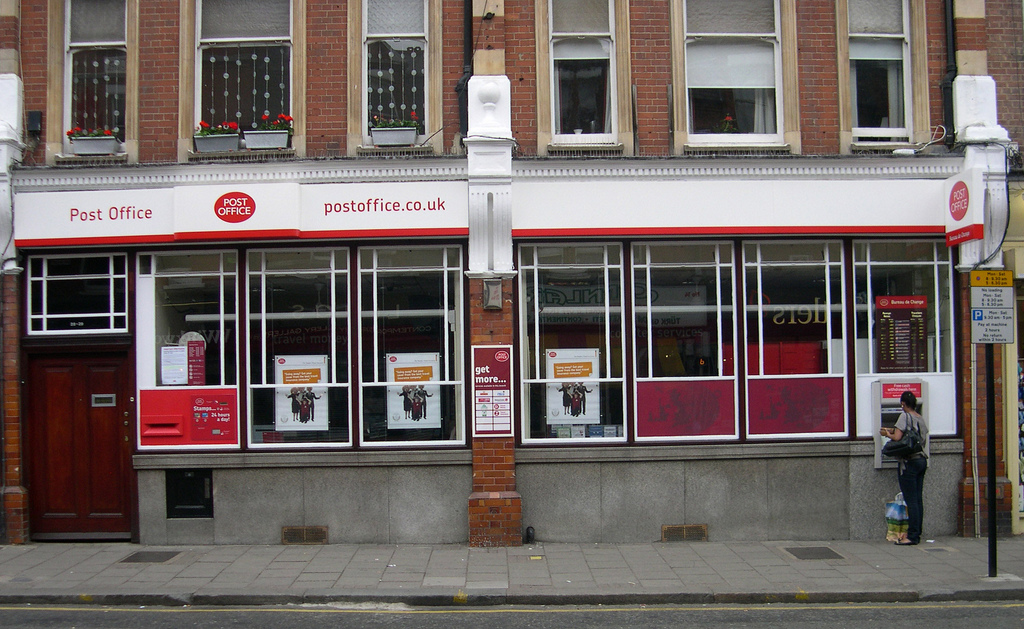 The franchising of the Crown Post Office on Topsfield Parade appears to have entered the final stages with an announcement of the retail operator. The change over is given as November.

The branch will continue to be run from the current premises by Universal Office Equipment (UK) Ltd. UOE are a office supply/stationery company which branched out into running in-store POs in East Finchley in 2014 (the staff will be employed by UOE). People may recall a BBC documentary about the issue shortly afterwards.

The services are promised to remain much as they are, though the proof may be in the pudding, –

The current premises will undergo a complete internal refurbishment to provide a bright, modern open-plan branch with the introduction of a range of stationery and office services alongside the Post Office service. We have stringent standards to ensure good access for all customers and our plans for the branch include improving access by levelling the threshold. There will continue to be wide aisles, low-level counters, PIN pads, hearing loops and customer seating. Directional signage will be provided from the entrance door through to the Post Office area which will be within a dedicated area at the back of the current premises. There will be five serving positions, which has been based on current and forecast future business levels, three open plan positions and one traditional screened position which will also provide travel money services, and a service point at the new retail counter.

The clear advantage is the revision to the opening hours, which will expand to include all day Saturday and 4 hours opening on Sunday. Click on the poster below for details. 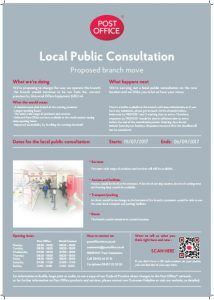 The ‘consultation’ (inverted brackets) runs from now until September 6th, and can be accessed online at the Post Office Views website, which also links to the official consultation letter. The limits to the consultation are described as, –

What’s next? We’re now starting a period of local public consultation and we’d welcome your views on the proposal. The change of management of the branch to one that is operated by a retail partner rather than by us directly is a commercial decision for Post Office Ltd and therefore we are not seeking feedback on this aspect of the change. However we welcome feedback and comments that can help inform our plans, particularly on the following areas:
– Thinking about your recent experience of using the Post Office, is there anything you would like us to consider which would make the premises easier for you to get into and more easily accessible inside?
– Are there any other local community issues which you believe could be affected by or affect the proposed change?
– If the change proceeds is there anything else we could do to make it easier for customers?

There are of course pointed questions the PO would presumably be happy to avoid – about long-term viability for instance, particularly if the retail operation goes under, and the terms and conditions for staff which will inevitably change under a new employer. Indeed there have been public meetings, and local councillors and the MP have signed up to a campaign opposing the decision (pic below). There was even a youtube campaign featuring local celebrities. What happens next for those opposed to the plans is unclear – we’ll post in the comments should information come to light.

For those still wedded to the notion of the civic realm, alas the world appears to have moved on – the Town Hall has been sold off, Highgate branch library seems destined to go under the hammer, the Royal Mail delivery office disappeared, and even the town square will be privately owned.  Any offers for a central Crouch End landmark timepiece-related building (one previous owner), good investment opportunity, some improvements necessary, may suit buyer with slight hearing impairment? 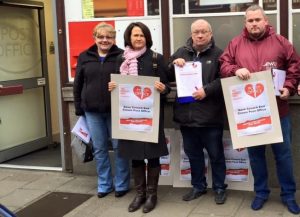 Campaigning against the move – what does Crouch End think?

Now that the UOE people have completed the work at Muswell Hill PO, it’s our turn.

The remodelling of the Topsfield Parade shop is about to commence – the last working day will be Monday April 30th, followed by a six week closure.

A shiny new PO and stationery shop will re-open in June.