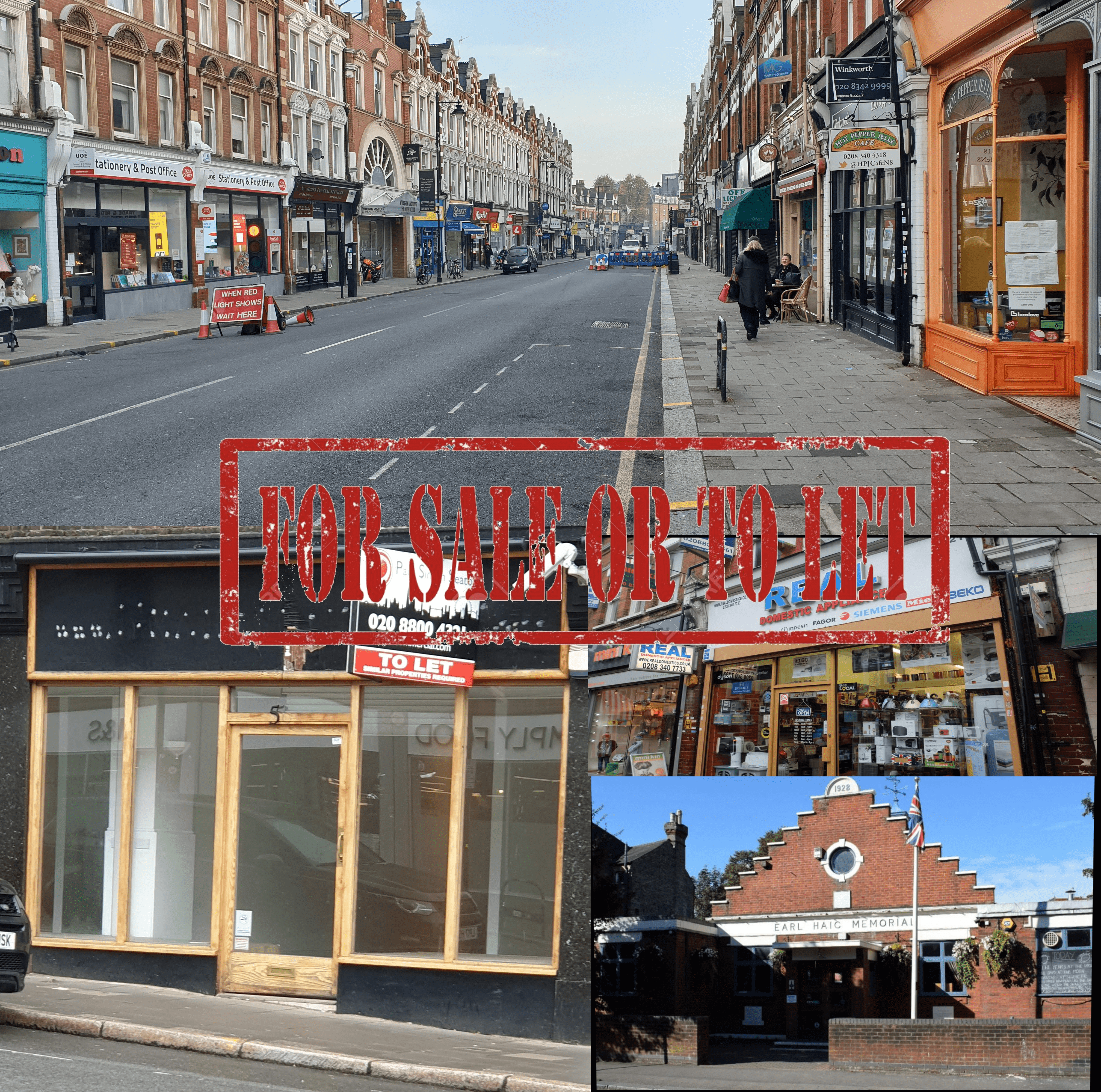 For the past few years, the Forum has conducted a retail survey looking at openings, closures and the balance of types of business in our well sized district centre. The most recent was in December 2018 with the conclusion

“Reasons to be cheerful then, as Crouch End seems decently placed”

but with an update in February

” A few weeks and a few shop closures later, with the Earl Haig, Subway, Oddbins and Sorbet gone, Santander going, perhaps Evans Cycles too. This is a closure rate three times that of 2018 (see list below), but just as notable is the nature of the shops. Last year all 15 closures were independents – this year, they’re all chains.”

and since February things have moved on , with several units standing empty, and other changes taking place. To list a few (though please bear in mind the situation can change rapidly)

So, a lot of vacancies and businesses looking to move on, but in many cases there are optimistic entrepreneurs ready to step in.

The red, amber green rating is my own subjective assessment of the seriousness of the situation. In red we can’t be sure why the business is on the move, nor what will happen next; in amber we have some clue as to what happens next; and in green we can see that a new, what I like to call ‘suitable’, business is soon to fill the current void. Note that this ‘thought’ represents the views of a single committee member, and is not the policy of the Neighbourhood Forum.

What’s to be done?

The malaise on all High Streets is widely documented, and the question for a Neighbourhood Forum is to ask “what can we do?”. The main tool a Forum has at its disposal is a Neighbourhood Plan, which is a collection of planning policies and a number of projects. Just becoming available are funds from the Community Infrastructure Levy (CIL) which are, to some extent, under the Forum’s Control. How effective can these tools be?

Rent and Rates and Internet Shopping

Said to be the defining factors driving High Street closures, these are absolutely not within the control of planning policy.

In the Highgate Neighbourhood Plan there is a line which reads

“Within the Village Core and where the Boroughs have designated shopping frontages, the presumption will be to protect A1 [shops] uses.”

Since this line was written, the government has published possible changes to the National Planning Policy Framework (NPPF), including:

The intention of the Highgate statement is to preserve the High Street much as it now is, i.e. a place lined with shops. The aim of the NPPF changes is to allow the High Street to become what it will, effectively removing the distinction between A1 A2 and A3. A further change is proposed which would allow fast food outlets to become homes. It may well be that the NPPF approach is an example of an “adaptive policy” a means whereby if the policy makers aren’t quite sure what to do they can blur distinctions and relax rules, in the hope that “someone will  do something about it”.

Given that a Neighbourhood Plan sits at the very bottom of a hierarchy headed by the NPPF, and is denied any element of insubordination, there is little scope left for this sort of control at the local level.

No doubt I can be accused of over simplifying the aims of the NPPF changes, if so I’d welcome your comments at the foot of the page.

Another element of planning policy has to do with the look and feel of a place. Crouch End’s Town Centre is very largely in a conservation area, which brings added control over the changes  shop keeper can make. Certainly, providing a consistent appearance to a shopping parade, can make it appear more attractive, and therefore more likely to attract the appropriate clientele. Seaside resorts are often characterised by flashing neon signs, brightly coloured shopfronts in varied shapes, with often provocative window displays. Crouch End is more subdued, with an emphasis on the ‘original’ and ‘traditional’. The facade has slipped somewhat in recent years, but could be restored by a clearer statement of what constitutes acceptable. There is some evidence of recent enforcement activity by the planning authority in that an unsightly external roller blind has been moved inside, a largely horizontal design has been reworked to more closely reflect the largely vertical designs nearby, and a blind considered to be inappropriate has been challenged.

A Neighbourhood Plan might usefully include more detailed design guidelines, to the general benefit of the shopping area. After a few years of enforcement the area could regain the nostalgic Edwardian appearance which our surveys show are popular.

This is a double edged sword. On the one hand the absence of danger, and air pollution and noise from the internal combustion engine do make an area more attractive to be in. But shopkeepers have a deep and abiding belief that providing parking spaces (and thereby motoring) encourages more custom. My own belief is that the more parking = more custom argument simply does not stack up. Crouch End has always been short of parking spaces. The local authority’s steadfast refusal to allow parking on the space behind Hornsey Town Hall has guaranteed this. There are a lot of forces lining up to compel us to revert to the stone age means of transportation, which is walking, and the “Ee, when I were a lad” bicycle. The forces include Greta Thunberg, The Mayor of London, The Haringey Cycling Campaign and, perhaps somewhat perversely, (get-there-on-foot) Transport for London. The Forum is currently involved with the Liveable Crouch End project which has the direct backing of three of those four forces, and the indirect backing of Greta. In combination they will probably be unstoppable, and notwithstanding the inevitable car/business owning backlash, they will have their way.

Let us hope that their claims of profligate spending by hordes of cyclists, and greatly increased footfall will be good for the High Street.

What do you think? Again, I’d welcome comments.

CIL is a tax levied by the local authority on large developments, and is ring fenced for spending on infrastructure of benefit to the community. There are rules in place to direct the spending of the levy to projects identified and defined locally. There is a lot of money involved. The Forum estimates £900,000 from developments we already know about. You can read more here.

“The High Street” could be a project, probably made up of a number smaller projects, perhaps including improving the appearance of shop fronts, making pavements more welcoming, improving street furniture, erecting direction signs, creating green, tree lined areas. It’s to be hoped there are more and better ideas.

At the risk of appearing tediously repetitive, we have a space set aside at the foot of this page for comments. Please do chip in, or better yet get in touch ([email protected]) and perhaps come to a committee meeting. We would welcome your help.

This association of local traders has recently shown signs of activity in association with our Neighbourhood Police Team. A proactive approach from the butcher, the baker and the candle stick maker is much to be welcomed.

So what is to be done?

Although planning policy seems to lack teeth the Forum will continue to search for suitable wording to be included in the Neighbourhood Plan. With fairly substantial amounts of CIL money soon to become available some meaningful projects could be put in place. The Liveable Crouch End project will change the look and traffic flows of the town centre. But to make a real difference we need your ideas and participation. I’ll say again , please do make comments , or come to a committee meeting