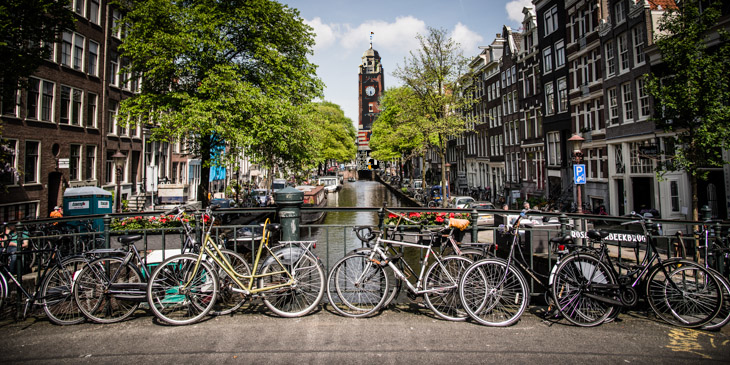 Over the summer the Forum ran a snapshot survey looking at priorities and issues affecting the public realm. This was in direct response to the feedback (and the prodding) we’d experienced as a consequence of the announcement of the Liveable Neighbourhoods Initiative, Crouch End’s very own little Amsterdam of a scheme.

We also wanted to introduce the concept of improvements to local shopfronts in response to the work carried out in other areas – aesthetics and heritage are important to the vitality of small town centres.

We have blogged about the LNI before, and if you haven’t had a read through, please do – the first part is here, and the second part here.

The little Amsterdam project is happening anyway, so we expect Haringey Council to launch a significant public consultation shortly, though in the manner of these things the transport planners may well have certain ideas somewhat ‘fixed’ in mind, and they’d prefer us to fall unquestioningly into line (I note TfL have had their cycle super highway cancelled in Swiss Cottage for this very reason, the courts deciding the consultation there was completely inadequate). As it goes we don’t subscribe to half hearted consultations – the future shape of Crouch End is too important.

So, in short, we thought a survey run by Crouch Enders here at the Forum might help concentrate minds at an earlier stage. This doesn’t replace (and isn’t intended to) the official Haringey/TfL consultation – but gives us a steer. 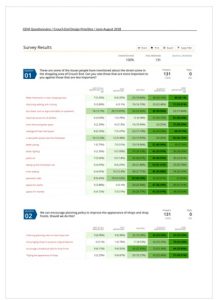 Please click the image to look at the data report. We think the comments alone are worth the effort.

What did we find?

Generally the outline concepts of TfL’s Liveable Neighbourhood Initiative are well supported by the data, though certain divisions remain clear. The vast majority of people wish to see improvements and the calming of traffic, but drivers are not always happy and the loss of parking is an issue. Similarly there are questions about provision for those who are less able to participate in ‘active’ transport.

The Forum seeks to represent the voices of Crouch End in this, a constituency which includes local businesses in addition to residents.

There’s a good deal of support out there for making improvements to the urban realm, and assertions such as “improving walking and crossing” (which 78% of respondents rated as ‘important’) and “more trees and green space” (84%) are overwhelming levels of approval. Now, these are wholly unsurprising results, but slightly more challenging ideas such as wider pavements and new public piazze also receive a thumbs up, and people like the idea of more space for events, for markets, and for increasing accessibility.

If the object was to assess the willingness of Crouch End to consider re-designing the public realm, the box appears ticked.

In question 2 we deliberately foregrounded the idea of making aesthetic improvements to the shopping parades of the town centre. Is there support for intervention? Once again, the response was in favour, particularly the proposition to retain original features (which is pretty much the current Local Plan policy). The proposal to encourage traditional designs was a little more cautiously received.

In terms of the LNI the transport questions are perhaps the most interesting – and where we expected sharp divides of opinion. The ‘apple-pie’ assertions once again received strong support, for example 74% of respondents were in favour of “calming traffic”, 51% strongly so. An even greater number, 82%, were in favour of “promoting walking and cycling”. Road narrowing, despite being easily interpreted as ‘anti-car’ received broad support, though many rated it ‘neutral’, perhaps reflecting the fact that people were not presented with enough information.

What didn’t people like? Well, they weren’t very keen on shared space as a concept and were against more parking spots. Two statements split opinion right down the middle, “closing side roads” and “reducing parking for cars” – so the LNI proponents have work to do if these elements form part of the project (as they undoubtedly will).

Nevertheless it’s generally nowhere near the polarised divide that we may have encountered. Let’s hope the final proposals meet with similar levels of public support. 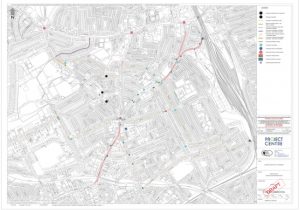 In the meantime detailed questions about the LNI scheme are building up, particularly after the initial concept map was secured through an FOI request, click for map, (and click through) and please do bear in mind that this is far from the final set of ideas. We had a look –

So, we look forward to the next step, and have asked for detailed analysis of all decisions. And remember, it’s not too early or too late to hear your thoughts. What impressions do you have? What changes would you like to see? Please do let us know.