Much of central Crouch End is a Conservation Area (an area of special architectural or historic interest, the character or appearance of which it is 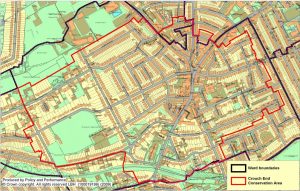 desirable to preserve or enhance). For more details on what this means, and which streets exactly are included please see the description on the Haringey website.

A Development Management Forum (DMF) is a public meeting to discuss a particular development proposal, moderated,usually,  by a member of the Haringey Planning Department , with a short presentation on behalf of the developer, followed by questions and answers from the floor. Again there is a Haringey web page which sets out more detail.
Based on my attendance at a recent DMF , and prompted by reading a note from a fellow Neighbourhood Forum member, I have had the following thoughts. To be clear these are my thoughts, and nothing set out here is necessarily the policy of the Neighbourhood Forum. Other thoughts under the heading of Design and Character can be found on this link.
Development Management Forum
The Forum I’ve just been to was unusual.
The usual sequence of events is that:
In the case of a proposed development on the KwikFit site, the process has been rather different. Certainly steps 1 and 2 have been undertaken, but at step 3 the developer has then approached both Haringey and the public for opinions about the proposal.
The public have received a flyer, there has been a public exhibition of drawings and plans in Hornsey Town Hall, and now the Development Management Forum.
The developer has asked Haringey  for pre-planning advice (a paid for service of the planning department), and has submitted the plans to Haringey Quality Review Panel, and has also appeared before the Planning sub-committee.
And we haven’t got to stage 4 yet!
Now, I guess that what the developer is hoping for is a carefully reviewed design which will sail through the planning process with a following wind, when it is eventually submitted.
Conservation Area
Conservation areas are re-assessed from time to time, to ensure that boundaries are carefully drawn, so that, as far as possible, what is inside the area merits conservation. Almost inevitably it will not be possible to draw the perfect boundary. It may be that some deserving elements of the townscape are excluded, and some undeserving are included. Our appreciation of different styles of architecture will change from time to time, items may go in and out of fashion , and over time our perspective changes. The Crouch End Conservation Area has not been satisfactorily re-assessed for some time. One of the duties which the Neighbourhood Forum has taken on is to look at such a re-assessment and to make suggestions. In this context a document is circulating in the Neighbourhood Forum which suggests looking again at some buildings in the conservation area which have been labelled ‘detractors’, i.e. they do not merit conservation. The suggestion in the note is that these ‘detractors’ should be measured against a standard such that , if a building is “a brave and well crafted attempt at doing something stylish, progressive and innovative or interesting or expressed the spirit of the age,” then it should not be regarded as a detractor. The buildings in question are:

59 Park Road and Next Door

DMF/ Conservation Area
One of the things the architect said at the DMF this week, was about his experience at the Quality Review Panel. He’d suggested including some art on the facade of the building, but had been told by the panel not to, because “art is personal and some people might not like it”. So, at a stroke, we have eliminated an opportunity to be brave or to express the spirit of the age, and this at the behest of the arbiters of quality.
The architect also mentioned that they had looked at what had been done elsewhere, and been successful, and tried to incorporate it in the proposal. So there goes progressive, innovative and quite possibly interesting.
I also suspect that architects see things in a design that the less architecturally cultured of us do not. One of the things the architect was very scared of was ‘pastiche’, by which I believe he meant an attempt to reproduce the style of the Edwardian terrace from closer to the centre of Crouch End, or of the Town Hall or that of the Hornsey Journal building next door to Kwik Fit. Use of the rather pejorative ‘pastiche’ suggests he thinks the attempt is bound to fail, and the result would be displeasing and anomalous.
Bland and uninteresting
So my fear is that both approaches to arriving at a Development Management Forum are almost bound to fail. The developer’s insistence on his profit will lead to the workmanlike , over development, contentious approach against which the neighbours bridle, while the consultative approach will result in elimination of anything that might offend, and with it anything that might satisfy the definition I started with.