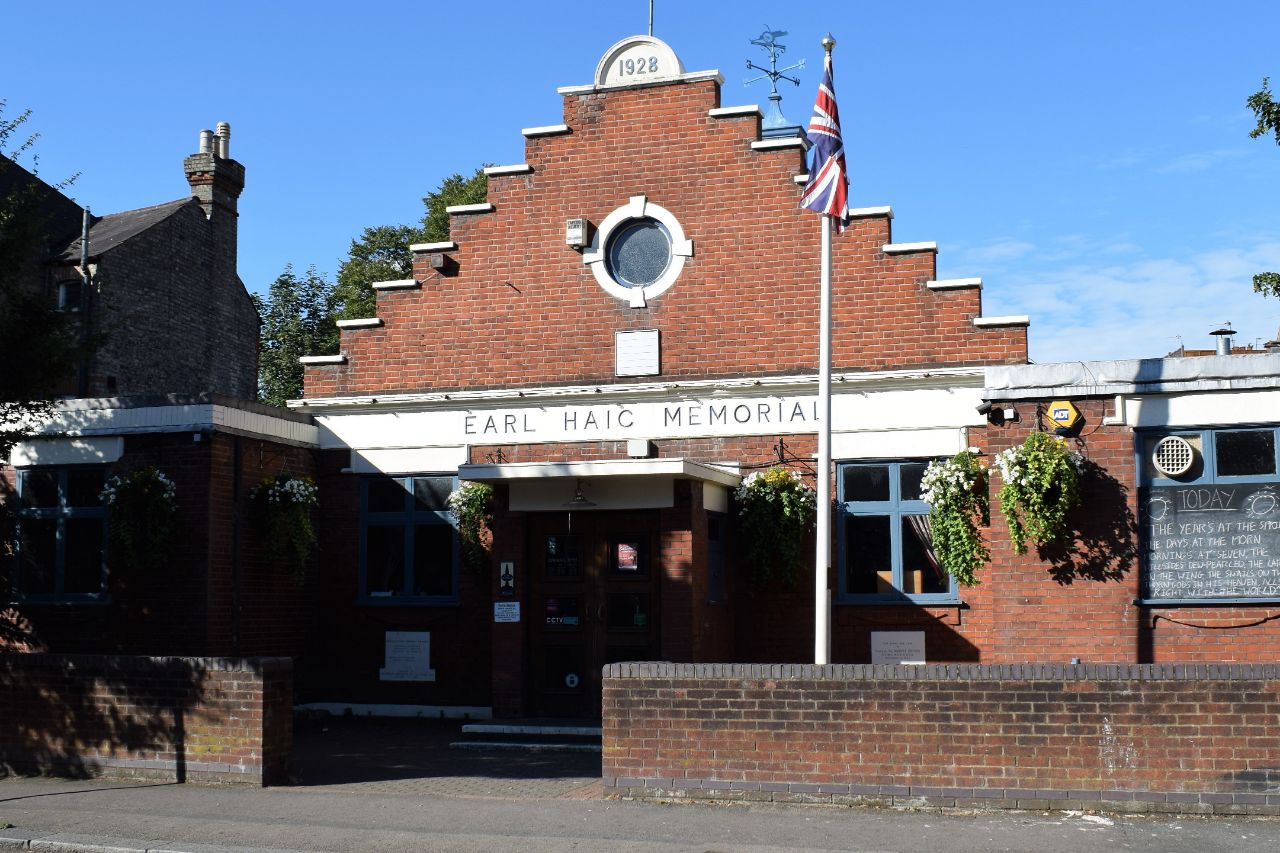 As people will know the Earl Haig was sold to a property company in January, the pub immediately closed, the building placed on the market. A month or so ago a planning application (HGY/2019/1026) for change of use, containing new plans, was submitted by a company that runs children’s nurseries, Safari Kid.

In the meantime, the Forum were encouraged to seek protection for the building from the prospect of complete loss and demolition, and to try and safeguard the community role that the Hall has played in Crouch End for the last 90 years. Consequently we sought to add the building to Haringey’s Local List of heritage assets (read more), and to have the Earl Haig designated an Asset of Community Value (read our submission here). The ACV was successfully attained a few weeks ago.

ACV status gives a community the right to bid for an asset should it come on the market, though whether the nursery company have already signed a contract, or indeed have purchased the Earl Haig, isn’t known.

The third element of CENF’s response was posted some 10 days ago, an objection to the planning application for change of use. The wish to object was strongly supported by local people, though few had any objection to nursery use per se, rather the desire to retain the community asset. Expect a decision from the local planning authority June-ish.

Read below for CENF’s planning comments.

CENF would like to register an objection to the planning application for the Earl Haig Hall in Crouch End.

Please note that the Forum has publicised and discussed the proposed operation of the building, the conclusion of which is that the clear local priority is to retain the building for the use of the whole community, and if possible to retain the pub. However, if the present use cannot continue, few objected to a nursery as an alternative.

Current and previous use

The Earl Haig Memorial Hall has served local social and community interests for exactly ninety years from January 1929 until January 2019, firstly as a base for the local British Legion for which it was designed, and recently as a pub. Always a locally important project, the Hall was erected through a campaign of local subscription, and has continued through the years to offer a much needed space for the community. Demand is evident, and to lose it would be a grievous blow. We believe the present use should be regarded as viable, whether as a pub or as a community-run operation, until such time as it can be proven otherwise.

Our assessment of the importance of the building as a community facility is included in the representation made to Haringey for a nomination of the Earl Haig as an Asset of Community Value. It can be read here – https://drive.google.com/file/d/1TBYvLVOJ3HTqBjni2jg_75g_ObdwGuIA/view (also see below).

In addition to the successful renewal of ACV status, CENF has also nominated the Earl Haig for inclusion on the Local List of heritage assets. This can be viewed here – https://www.crouchendforum.org.uk/local-heritage-list-extras-earl-haig-the-arthouse/ .

The Hall is of course already a non-designated heritage asset sited within the Crouch End Conservation Area, and is particularly notable for its historical and communal interest and evidential value representing the period in Crouch End’s development when the town emerged as the civic centre of the Borough of Hornsey, and the commemoration of the First World War.

It is to be welcomed that the current application will retain the outward appearance of the building. However, the loss of the interior, including the original main hall and stage, has a significant, irreversible and harmful impact upon the character and heritage value of the building – and represents the total loss of the original purpose and operation of the space. Such a radical move cannot be acceptable as an optimum use, will be deeply regretted and if at all possible must be avoided.

The protection of the building and its function are clearly detailed in the Haringey Local Plan, the London Plan and the NPPF, and the loss of the community facility and pub should be resisted.

In addition, we note that SP16 precisely describes the facility we are in danger of losing here –
8.1.4 Community facilities can provide a range of services in one location, e.g. a community hall can be used for meetings, exercise classes, performances, exhibitions and other uses. As such, grouping facilities together allows a greater number of services to be provided in a single place, makes best use of existing buildings, makes efficient use of land, and encourages links between the facilities and services. Haringey will support multi-purpose community facilities that can provide a range of services and facilities to the community at one location.

Furthermore, in reference to DM49, we believe the applicant has not offered evidence to show: that the facility is no longer required in its current use; that the loss would not result in a shortfall in provision of that use; that the existing facility is not viable in its current use; and we are not aware of any evidence supplied which demonstrates that the premises has been marketed as a community facility for the stipulated 12 months.

(b) Asset of Community Value

Further weight should be accorded to the listing of the building as an Asset of Community Value, the Decision Notice of which states –
10. The Assessment Panel decided that the current (non-ancillary) use of the building meets the requirements of Section 88 (1)(a) for the following reasons:
(i) The use of the public house furthered community cohesion in this area of the Borough by providing a space for all members of the community to use and meet.
(ii) The facilities were recently used for community meetings, political gatherings, fairs, theatre nights, live music and a range of other activities until early in 2019 by a wide range of local organisations and it is reasonable to believe this could continue
(iii) There is clear evidence of a demand for such local meeting spaces

With regard to the provisions of the Asset of Community Value, it is incumbent upon the council to ascertain the current ownership of the premises, and whether any conditional sale to the nursery company meets the requirements of the legislation. Secondly, we note the desire that “development proposals which affect a listed ACV are required to consult the local community to ensure that new and enhanced community facilities of all types, best meet their needs and aspirations” (policy DM49, para 7.18).

We look forward to any approach.

Policy DM50 safeguards pubs, particularly those with a strong local community role. The operation of the Earl Haig as a pub which foregrounded community uses was a happy outcome to the last major change of ownership. An operation on similar lines is clearly the preferred objective now.

We are not convinced by the applicant’s assertion that the pub was not financially viable. The previous operator, Antic pubs, had in fact simply divested itself of a number of properties when a short term investment vehicle (an Enterprise Investment Scheme) came to an end. The profitability of the pub was not an issue.

We note the entirely apposite supporting text for DM50 –
7.19 Public houses are an important community asset. They are often closely associated with the life and identity of local communities, providing hubs for social interaction and venues for community functions, including informal meeting places for community groups. As such, public houses can contribute greatly to social cohesion, especially in residential neighbourhoods. They also help to support and promote the evening economy, enhancing the vitality of residential neighbourhoods and town centres.
7.20 Public houses can also act as repositories of social history and, if they are buildings of historic interest, can be valued heritage assets, forming an integral part of the streetscape. … Consistent with the NPPF, the Council considers that public houses are community facilities, and in accordance with Strategic Policy SP16, seeks to safeguard against their unnecessary loss.

CENF supports the provision of children’s nurseries and recognise the local demand for places, with the proviso that in this instance the social value of a nursery falls considerably short of the current and historical flexible operation as a community facility.

We observe in the accompanying correspondence with the council, that possibilities may exist to offer the Hall for alternative community use at times, presumably evenings and weekends when the nursery is not operating. Can such intentions be presented as part of the application? Could space available to the community at appropriate rates also form part of subsequent planning conditions?

Lastly, local residents are concerned that the location is unsuitable for a nursery due to the parking stress of the immediate area. We note that the applicant’s own figures suggest a high level of parking stress along Elder Avenue during the key 8-9am drop off period, which will be highly problematic for those who have to safely park to drop off very young children.

CENF believe that the proposed change of use for the Earl Haig Hall should be resisted, supported by policy, because of the continuing local demand for the current, now previous, use. The pub was well regarded, though we would reiterate its chief value lay in its ability to continue the historical role of community hall. A nursery can only be supported if the clear requirements of policy are met.