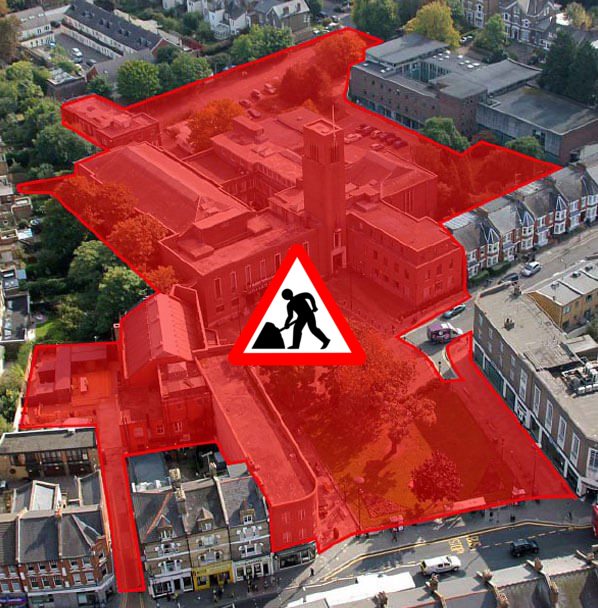 So what to make of the proposals for the Town Hall? Well, we certainly like the ambition.

The debate rages on of course, but recent announcements confirm that the project is, subject to planning, on track for a mid 2018 start.

In the meantime the Neighbourhood Forum became a bit more forum-like and invited all to a well attended public meeting on September 12th, we solicited opinion across Crouch End – and we’ve met with the developer too. What we found is that local people are invested in this building. It’s a community asset, has the highest heritage significance in the area, and presents huge opportunities (and risks too). Many in the community felt that seeing the Council walk away and dispose of the building and the town square to developers was unsupportable. But we are where we are, and as many others have pointed out, a solution is long overdue – and this project promises much, not least the restoration of the heritage spaces and the retention of the auditoria.

It is in this context the Forum has offered its comments on the planning application (read them here). This project needs to work, both in terms of viability and in terms of the relationship to our townscape, so we decided to formally object, better to press for a number of amendments seeking to improve the scheme while protecting the historic fabric and neighbouring amenity.

Don’t forget if you want to get involved in the Forum’s work, let us know. Previous posts on Hornsey Town Hall are here. We anticipate a planning determination by the end of November.

Absolutely. Creating a large(ish) hotel within a high-maintenance listed building – and in a location without a tube station – is a bold move. 8 restaurants, cafés and bars (*count ‘em) will spread across the site too. Balancing the risk (we hope), the Far East Consortium are experienced hoteliers, and we’re all anticipation at the prospect of a 4 star operation in downtown Crouch End pulling in the crowds. But we know that it’ll need a tad more of a USP, something extra, and that really has to be the arts offer in the auditoria next door.

So, what of the arts offer? A joint venture between FEC and Time + Space Co. we understand (announced a few days ago). There are still more questions than answers, but meetings and vision are promised shortly. ‘Will it work?’ is the first up. The future of the local economy and the Crouch End brand (sorry) is tied up in this, and there’s real potential. The challenge is this: if the operation is based on the performing arts, then the viability of the auditoria will depend upon audiences well beyond the immediate locale, just as surely as the hotel. It’s a high bar. We await a compelling vision. A wedding venue won’t cut it.

And no one wants the project to fail, least of all the community. These spaces were built for us. Our concern is that the arts offer appears to start with one hand tied behind its back – whereas the admirable ANA project relied upon the suite of offices to generate revenue, that option has now gone. Well, two hands behind its back, as a private sector commercial venture will not have access to public funding (most arts centres need it). Okay, three hands, as the rule that 60% of activity has to be at reduced rates for community use reduces revenue too (although in a nice way)…  At least an operator is now appointed – the final design of the spaces would benefit from a considered analysis of use and function.

We think it’ll need the community’s help – and a commitment to cross subsidy from the rest of the project. This development works together, or not at all.

What Time + Space appear to bring is a link to creative business ventures such as Birmingham’s Custard Factory, which we’re keen on – three years as a small business hub proved a great success at the Town Hall and revealed real demand in Crouch End for flexible workspaces and a whole range of creative and professional local enterprise. This is a good thing, and one we urge FEC to build into the project. We’ve already suggested ideas, and if not the mews, the empty office spaces of the Broadway Annexe are still there, beckoning. It really wouldn’t take much. Lick of paint.

The other big move is the re-design of the town square, which has to work for all users, as public realm, as a green space, and for the festival and events too. We’re told architects and stakeholders are presently exchanging ideas (also a good thing). The details of surface materials are hugely important, as are limits to commercial exploitation. It’s an easy thing to get wrong, and the square is a keynote for the whole scheme (by the way people, the Amnesty tree is due to be moved a few feet further back, that’s all).

So why did the Forum object?

For pretty much the same reason as Historic England decided to caveat their ‘approval’ (and because so many of you felt it was important to take this clear stance): much of Crouch End’s appeal rests on the character of the late Victorian townscape, and its conservation area requires the scale of new developments to be controlled. This proposal is two storeys higher than anything else built since the sixties. The developer argues that the project has significant risk, and that the revenue from all 146 flats is necessary to fund the restoration of the Town Hall – but in the final analysis we were not convinced that the project requires this level of capital to be generated or that the balance was right. 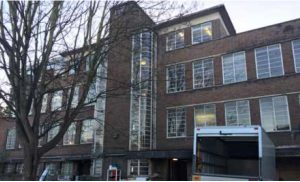 Will the project numbers add up to providing affordable housing? We don’t know, but believe the safeguard is through transparency – assessments of viability provided by the various consultancies should be publicly available.

Concerns were raised over transport and about the impact on local services. We hope that improvements can be made to transport planning. Alas almost all of the funds the developer is obliged to contribute to improving local infrastructure and services (the Community Infrastructure Levy) will simply be spent elsewhere in the borough. Haringey policy. If you ever wonder why our pavements are so bad, now you know.

PS. We understand the meanwhile use, run by ANA as Hornsey Town Hall Arts Centre which plays home to a current 83 local businesses, has an extension agreed until next June. The 2018 Crouch End Festival looks secure too. Our thanks to FEC for facilitating this.