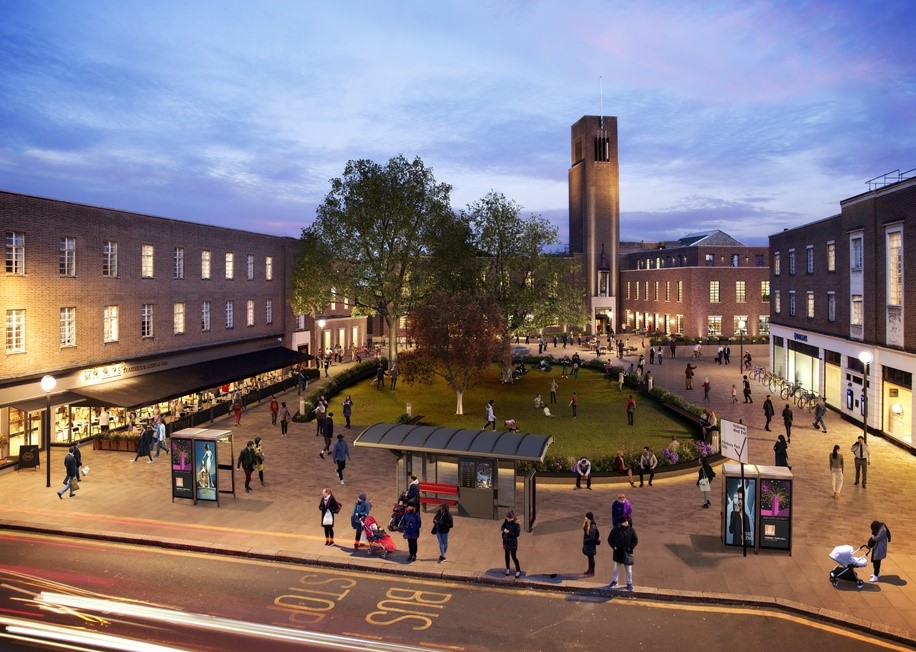 With the final piece in place*, the ownership of Hornsey Town Hall and site will formally transfer to developers Far East Consortium (FEC) in the next few days, on a 130 year lease. After two decades of uncertainty and deterioration this is a rather momentous event. We’ll leave the grand overviews to others, but thought a brief update of this crucial Crouch End development might be helpful.

*Planning permission was confirmed as of April 24th.

Edit. The contract and lease were signed on Wednesday May 2nd.

“…as a municipal dreamer, I can’t help but regret the loss of the Town Hall complex’s original functions and, more intangibly, the dignity and presence attached to them.  If you do visit Crouch End, admire the architecture and recall the civic pride it spoke to.”
(Municipal Dreams weblog)

For those new to this, … FEC’s Hornsey Town Hall project is a £140m mixed development, quite a big deal for Crouch End, with significant potential for economic and cultural regeneration. I guess the community will be the judge on whether the developer’s plans and the work of Make Architects measure up to the ‘dignity and presence’.

FEC plan a 67 room hotel, run by subsidiary Dorsett Hotels, and an arts/creative hub and venue operated by Time+Space Company – this incorporates the heritage spaces. The Town Hall public square becomes a privately owned space (I don’t really know why) but will remain publicly accessible and have a complete redesign. The development also features a number of bars and restaurants. The enabling residential build is 146 flats, including two large blocks in the car parks to the rear. This includes 11 affordable (social rents) units onsite.

There are significant issues of interest to the local community, who remain important stakeholders in all this, and the Forum has conducted a number of consultations to produce our priorities – conservation of building and enhancement of conservation area; conversion of heritage assets to productive use; support for local economy; and community access to public spaces.

The Forum strongly objected to the height of the blocks of flats – we still do, though we respect the determination made by the planning authority. The planning decision is here.

More recently we’ve highlighted issues for the designs and uses of the public square (discussed here), and the viability of an arts centre (is it an arts centre? – discussed here). The availability of office space suitable for small local businesses remains a concern – we will continue to press for such provision across Crouch End.

Contracts were signed on February 15th 2017, planning permission finally agreed six weeks ago on March 13th 2018, and the lease will be formally granted in the next few days. A summary timeline –

With Make Architects finalising technical drawings, and contractors shortly to be appointed, FEC are clearly not hanging about. This is a tight schedule. The development ahead –

FEC and their PR, Newington Communications, are currently preparing a new community engagement plan. This will encompass both aspects of community interest, providing – a Community Liaison body as a forum for residents affected by or interested in the construction and development of the site; and a Community Steering Group, organised by the community arts operator, the Time+Space Company, charged with the future development and operation of the ‘community use spaces’ of the Town Hall. Read more on community groups.

Please do register an interest if you wish to the new owners on their website. Or indeed with the Forum – we aim to maintain contact and regularly report on developments. 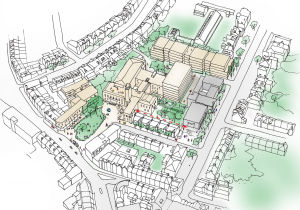 Many objections have been assayed against this disposal – however, key public benefits are secured as conditions to the sale. A commendable result. We took a look at the proposed outcomes at this year’s CENF AGM –

Of course Haringey’s additional objective was simply the avoidance of risk and further expenditure (scarred by their experience with Alexandra Palace no doubt). And this is still a risky project. The vast majority of property developers chose not to go near this offer with a bargepole, and the fact that Haringey found someone with deep pockets able and willing to see the opportunity is an achievement.

Affordable housing was not prioritised. That was a decision Haringey probably came to regret politically, but is still arguable. With costs so high something had to give, and the priority had to be the restoration. As it turned out, and comparing like with like, this project is delivering 26 affordable units (11 onsite, Haringey are providing 15 more with their capital receipt), whereas other bidders were only offering 4 units – the same as identified in the old 2010 scheme. The Mountview scheme had zero. The FEC project may not be perfect, but is an improvement.

Public authorities, subject to government guidance, have the right to dispose of redundant assets. It is true to say that alternative solutions for HTH were available, but we are where we are – and Crouch End may have landed on its feet. The proposed restoration is impressive (almost all spaces are retained – hence the support of Historic England), the hotel appears to offer a sustainable revenue stream for the building (fingers crossed), an arts centre of a kind is still part of the project (it’s important to remember having one was never a condition), lots of bars and restaurants are promised for the local swingers, and the building will be generally open to the public and available for community use (even if details and prices are to be confirmed).

Offloading public assets, including London’s Town Halls, isn’t unusual these days – there are scores of them: Bethnal Green Town Hall’s a hotel, Friern Barnet a dull block of flats, Ealing have just sold Southall Town Hall to a Hindu temple, Marylebone’s the new London Business School, Fulham seems lost to retail, and most egregiously Wimbledon became a Tescos. Evidently anything goes, so we hope the Crouch End variant proves a success. 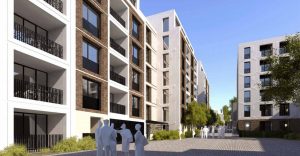 PS. The marketing suite is due to open shortly in the west wing. Go and have a look at the scale model.

The Marketing Suite is now open, with the model (click image)… 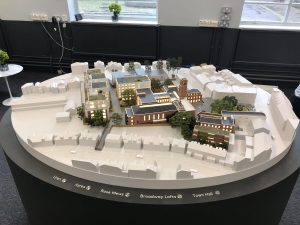 1. The Community Liaison Group
This is a planning condition (no.52), set up for the duration of the development itself, as follows –

The terms of reference for the Liaison Group should be submitted to the Council for approval prior to commencement of the development. The Liaison Group will meet at least once every month with the first meeting taking place one month prior to the commencement of development and the meetings shall become bimonthly after the expiry of a period of four (4) months thereafter or at such longer period as the Liaison Group shall agree.
Reason: In order to ensure satisfactory communication with residents, businesses and local stakeholders throughout the construction of the development.

This is to be a long standing committee set up to oversee the community uses of the building. It’s as laid down in the Community Use and Access Agreement, and the objectives for the group are –

(i) the adoption of an open front door policy to ensure public interaction with the Building (other than the Excluded Areas);
(ii) enhancing and maximising the potential and opportunities for Community Access to and Community Uses within the Building (other than the Excluded Areas);
(iii) engaging with the local community and the wider public, including businesses, community groups and other interested stakeholders to encourage Community Uses by as broad a spectrum as possible;
(iv) the implementation of a policy of pricing aimed at ensuring that the obligations and Objectives set out in this Agreement in relation to Community Use are achievable;
(v) pursuing Community Use Initiatives aimed at both retaining use of the Community Use Spaces by existing/regular participants and encouraging use by new participants;
(vi) securing a balanced range and programme of Community Use opportunities not biased towards any particular activity and/or user group;
(vii) allowing and retaining flexibility to extend Community Uses and Community Access beyond the Minimum Community Use Spaces and the Minimum Community Access Spaces.