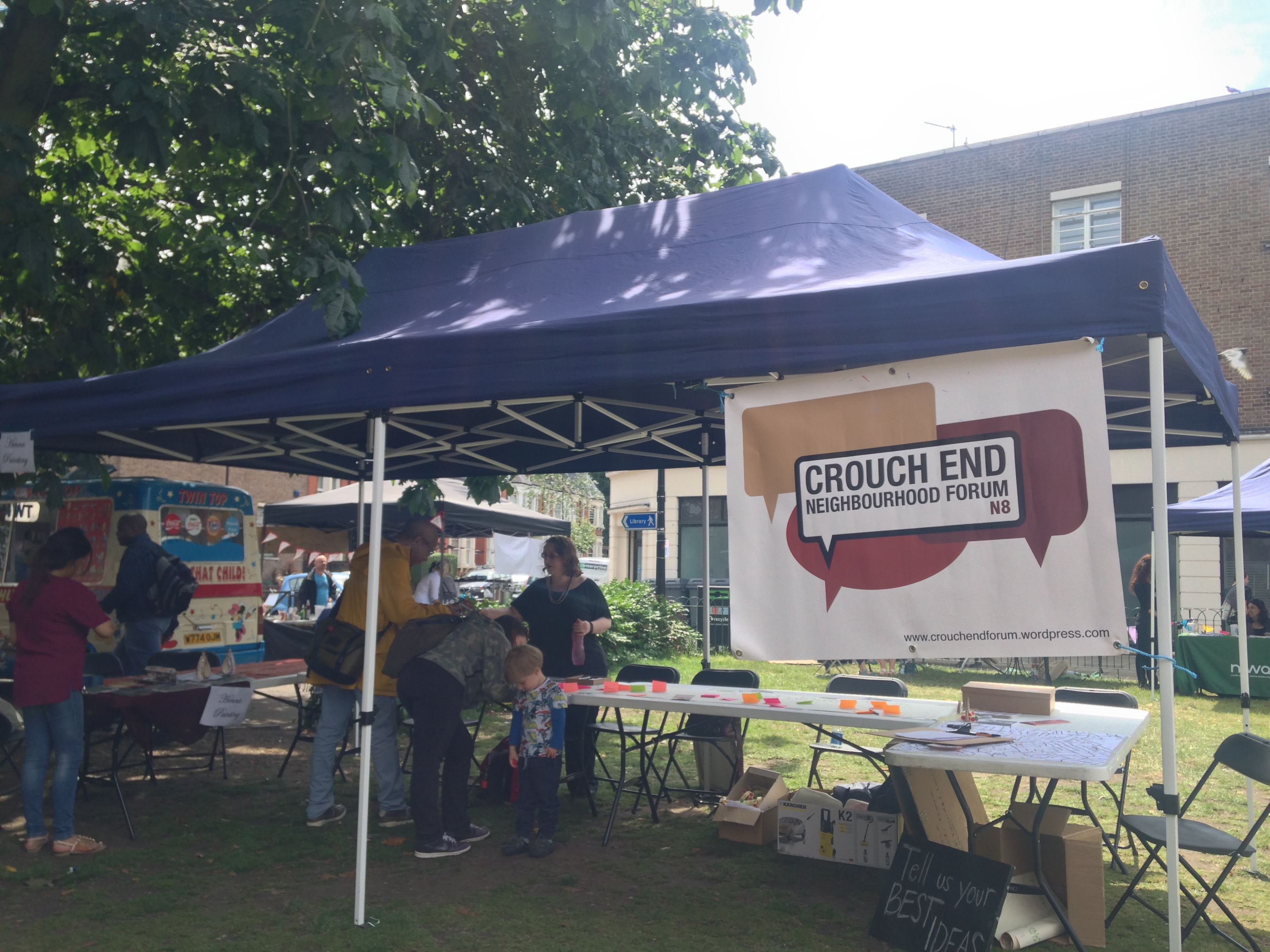 David Winskill reports on the month.

June was quite a month for the Neighbourhood Forum. We seem to have sent most of it in the Hornsey Town Square asking visitors to the excellent Crouch End Festival three big questions…

Hundreds of people put their thoughts on post-it notes: you can see what people said here, and, (we’d love you to do this) send us your suggestions. There were some great ideas but two suggestions that caught our eye were for a Museum of Crouch End History (The Hornsey Historical Society on Roksley Avenue already do a great job) and for a Fudge Shop. Yum!

There is still some analysis to do and we will be passing the results onto the six working groups (Housing, Economy, Environment, Transport, Design and Conservation, Social and Community) which will be researching and writing the neighbourhood plan.

The two issues that attracted the most questions and comment were the future of the Green and the Town Hall itself. A local resident has started a petition to keep the green in public ownership and, at last count, had collected north of 2 000 signatures .

The OJEU disposal of the Town Hall is expected to reach its climax in autumn with final bids expected to be with Haringey at the end of July and the announcement scheduled for September. In June, the Neighbourhood Forum wrote to Cllr Alan Strickland about our concerns for community governance and ensuring the long term future of the building, public use and access. You can read the letter here and Alan’s reply here. You can also see what the Appreciation Society is saying as well as the latest from the HTH Creative Trust.

If, Brexit permitting, the town hall does leave public control, then we all hope that the new owner will look carefully at what ANA have been doing recently – things that town halls are supposed to do: well over 4 000 people went through the doors during the Festival ; people watched film shows, bopped at a silent disco, sashayed at the Latin festival, oompahed with the Met Brass Band, listed to Ray Davis chat to Mark Hamill, got cultured-up at the Ply Gallery, got bevvied up and watched the Euros in the assembly hall, and Catherine West had held a mass meeting about … Brexit .

There is a lot going on in Crouch End and this means a lot of challenges to keep the things we love and to change the things that could be better. You can help with that change by getting involved with the Neighbourhood Forum. Do give me a call if you (or a neighbour or friend) would like to learn more.