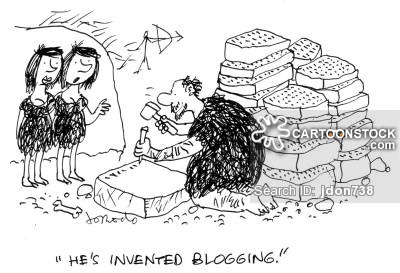 The future of the library, both as a physical institution and as a concept, is now increasingly subject to challenge. Some of those challenges come from the rapid changes in the way we can store and distribute information.

Books were first produced in quantity in the 15th Century, and their comparative rarity and cost were the justification for lending libraries since the mid 19th century. Since then we’ve had wind up gramophones; vinyl; audio cassettes / walkman; compact discs; DVDs (come, and almost gone, since 1995 – I can’t remember the last time I put a DVD in a drive); USBs and so on. Most of these are now largely defunct. This computer I am using does not have an optical disc drive, and it really does not matter.

The library has had to maintain its role of lending books to those readers who want that service, whilst at the same time expanding to cater for those who use new media. But have we reached a tipping point, such that the role of the library is about to fundamentally change? Is it time for a rethink? The Boots’ lending library my mother loved so much bears no relation to what we need now.

Claire Kober wrote on the subject of libraries some years ago. She saw the lending of books and CDs and the as the tip of the iceberg of library activities, and listed others such as:

But  is the lending of books, CDs and DVDs no longer going to be the core of the library? Will YouTube, the Kindle, Netflix and streaming render them irrelevant?

So what would we expect from a project to modernise Hornsey Library? Should it grapple these issues? 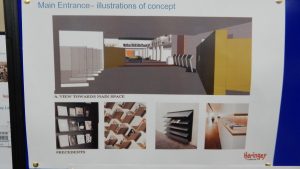 The library service put up a display in the library recently, and asked for comments. These pages have never been made available on the Haringey website but some rather poor images of the display can be seen on a local website. The plans that the library service have in hand seem pretty advanced, given that they have already been out to tender and have selected the company “that will work on and help us to develop the scheme to detailed design and implementation stage“.

Given that Hornsey Library is a listed building, there is not a lot of scope for major changes. The proposals include some very welcome repairs to the building fabric, and some modernisation of the interior. The main efforts seem to be directed at those core uses of the library that are already established. On the ground floor there will be a new layout with new bookshelves, and the children’s library will be upgraded. The mezzanine floor will be dedicated to new media, and the upstairs study area improved. The Promenade Gallery and tea bar will receive a new look too.

So is there more that needs to be done to improve Hornsey library?

Many regular library users just love taking a short term loan on one of Haringey’s excellent selection of carefully chosen books and latest international DVD /audio selection, material which is usually not available in the cinema.

Putting aside what the library gives to the grown ups, including many on low income who have nowhere else to sit and watch a film or read the paper, many of our children have all got so much benefit from the children’s library, and discovered much of the world through reading with their parents and by themselves .

The library should remain a great educational facility for all ages, as well as an excellent community facility available to all.

Perhaps they should combine traditional media with improvements to modern media, better wi-fi and other multi-media viewing. Home printing is a bane, so if they can provide this at a small profit to the library to home users and small businesses, they can easily make some money back to fund such improvements.

We don’t get rid of live TV simply because it is available on the internet. Why? Because we are humans seeking to enrich our souls, not kill them.

If you have a view on how Hornsey library should change you can email judith.walker@haringey.gov.uk to let her know. Perhaps it is not too late to add some great new ideas to the proposals that are going ahead. Or just add your comments to the foot of the page. 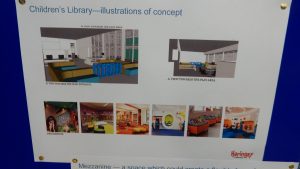