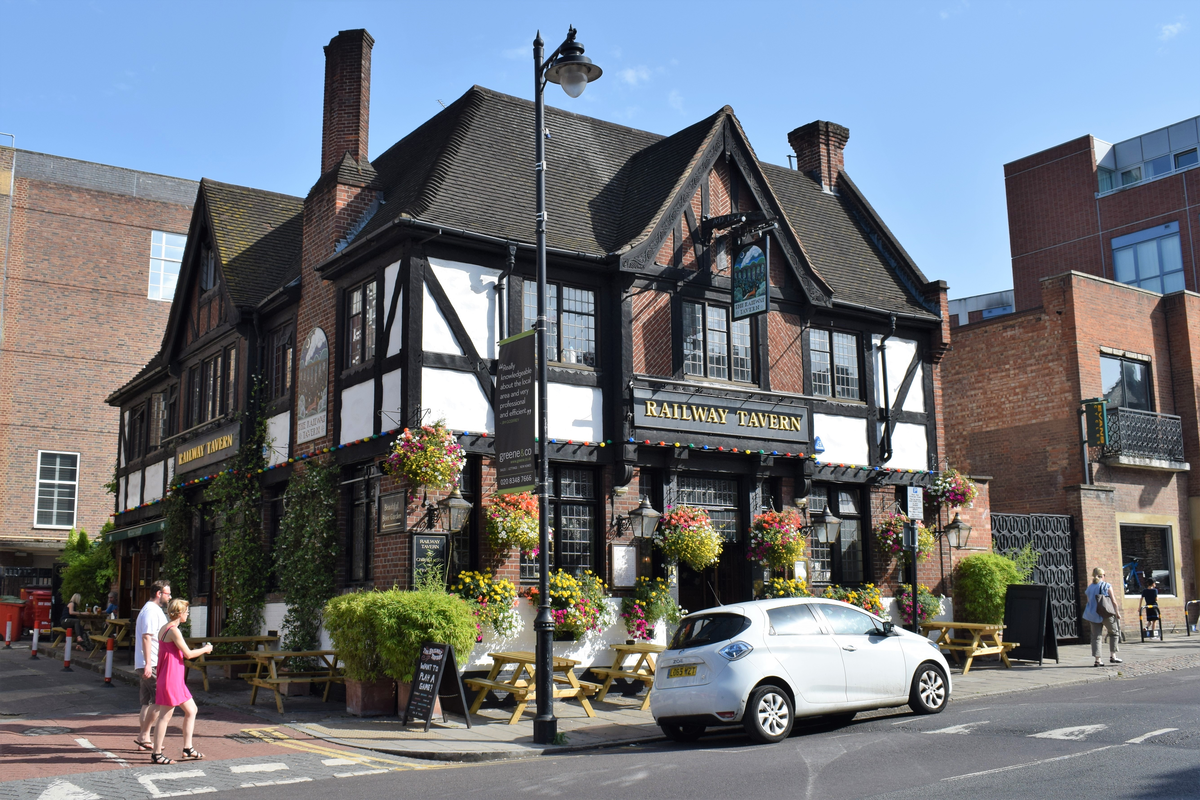 As mentioned in our blog outlining the review of Haringey’s Local Heritage List, the Forum has lobbed in a few extra suggestions for inclusion. In this post we’re looking at some of our nominations, local landmarks – the Railway Tavern, the King’s Head, and Palace Parade. You can see the full list of locally listed buildings in the earlier post, and further CENF nominations in the blog ‘Local Heritage List extras‘.

A once ubiquitous but increasingly rare example of London suburban inter-war public houses, Charrington’s Railway Tavern of 1937 is in familiar half-timbered brewers’ Tudor. Possibly by Charringtons architect Sidney C Clark, the exterior is intact, with an interior somewhat altered.

It replaced a nineteenth century pub of the same name owned by Hoare & Co, when this section of Crouch End Hill was cleared to make way for the Mountview Telephone Exchange (opened 1938, since partially rebuilt). The pub is named after the nearby now-disused railway and Crouch End station.

The Railway Tavern is not currently locally listed, though lies within the Crouch End Conservation Area. The 2010 Crouch End CA Character Appraisal identified the Railway a positive contributor to the CA. The historic interior is recognised by CAMRA within its London Regional Inventory of Interiors.

Original appearance, image : National Brewery Centre. Photo taken by the Charrington Brewery during an architectural survey of their pubs.

A large detached building of two storeys with first floor black and white half timbered and a red brick ground floor, with two central projecting gables on either side. The pub is designed as a corner building in response to the entrance to the adjacent telephone exchange buildings. Further Tudorbethan forms include the steeply pitched roof, tall chimney stacks, casement windows with leaded lights, heavy structural wooden beams and corbels, diagonal brick courses and diaper patterns. Charringtons ‘The House of Toby’ glazed tile signage to side. The date ‘AD 1937’ is inscribed on a curved pub sign bracket.

An ‘improved’ public house, the interior was unfortunately opened up around 2000 partially removing the upper parts of the internal dividing walls, though the original layout is still legible. Originally there were three bars named after a railway theme, including ‘signal’ and ‘terminus’ bars. The public bar was to the front, the lounge to the rear. The bar, bar counters and back rooms remain in situ, as does the Charringtons bar back (with Toby symbols), half-height panelling, fireplace with copper hood and inglenook (a feature of SC Clark designs), and oak doors. 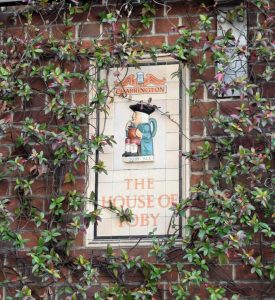 The pub may be among more modest examples of the form, but it retains strong architectural interest and integrity as a surviving representative example of inter-war brewers’ Tudor, built for Charringtons. Charrington, based in Mile End, was a prolific builder of 1930s pubs, and the Railway stylistically, exterior and interior, belongs to the group of pubs designed by the brewery’s Chief Architect Sidney C Clark (attribution unconfirmed). Few of Charrington’s pubs of the twenties and thirties survive intact, with many demolished, converted to other uses, or otherwise transformed. Other SC Clark pubs have attained statutory listing.

The significance here is in the rarity value of a once familiar feature of the English high street, often overlooked and now fast disappearing, and potentially as a surviving example of Clark’s work. We note the recent demolition of a sister pub, the Duke of Cambridge in Kingston Vale.

The Railway possesses historical interest and evidential value as an example of an ‘improved’ pub. Improved pubs were designed and marketed at a more respectable clientèle, including women, as evidenced here by the arrangement of bars and the original inclusion of an upstairs restaurant and kitchen. The restaurant was in operation until at least the end of the 1960s.

It has been previously overlooked as a heritage asset, perhaps due to its setting – compromised by poor surrounding buildings that also detract from the local Conservation Area. The pub was not identified or considered as part of the survey in Emily Cole’s ‘The Urban and Suburban Public House in Inter-War England’ (2015 Historic England).

The pub is now owned by Mitchells & Butlers. 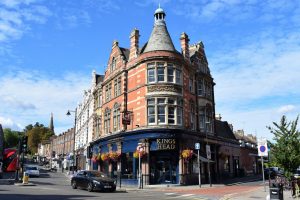 Long-standing landmark public house, built 1892 as part of a group with the adjacent Crouch End Hill shopping parade. A public house has occupied a site near the southern end of the Broadway since 1662, acquiring the name ‘King’s Head’ by 1812. Early nineteenth century accounts describe the village pub informally known as the ‘yard of pork’.

The upper storeys are intact, through the ground floor windows are altered. The interior is opened up, lost in the latter decades of the twentieth century. The King’s Head is situated within the Crouch End Conservation Area.

An ornate, decorative 3-4 storey corner building in red brick with stone details and banding – built in a combination of Victorian revivalist styles. The roofscape features striking Dutch gables, tall chimney stacks and a large round corner entrance rising to turret with conical roof surmounted by copper clad cupola. A large canted oriel window forms a key feature of the Coleridge Road elevation. The ground floor windows are altered, but much survives including the polished granite Corinthian pilasters. The building forms part of a shopping parade group with nos. 4-12 Crouch End Hill, built by the same builder. The date ‘1892’ is repeated throughout the stone window decoration. A cast iron street name plaque at first floor level.

The King’s Head has architectural interest as representative of the boom years of Victorian pub building, lending a positive aesthetic value and enhancing the interest and character of the townscape. It has aesthetic interest as a prominent landmark building of the town centre, illustrative in the Crouch End setting of a Conservation Area characterised by nineteenth century development and the construction of shopping parades and pubs of the 1890s. It forms a companion piece to the other turn of the century public house at the northern end of the town centre, the ornate, but more imposing, Queen’s – itself listed grade II*. The Crouch End CA Appraisal (2010) identifies it as a positive contributor.

The King’s Head has historical interest and evidential value as the oldest public house site in the area, supported by accounts describing a village inn at the crossroads of main routes from London, dating from the seventeenth century. In addition, and more recently, the pub basement has provided clear community and social interest as the home of a well known comedy club. 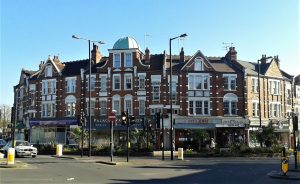 A last minute addition to the CENF nomination list –

Central section of a substantial Edwardian shopping parade on the corner of Priory and Park Roads, built 1906. Designed by prolific and locally significant architect John Farrar for estate owners the Warner family, the parade is the centrepiece of the Warner or Priory Estate.

The parade has architectural, aesthetic and historical interest, illustrative of the growth of the suburb and a well valued streetscape. The setting is part of the approach to Alexandra Park and Palace.

Palace Parade is not within a conservation area.