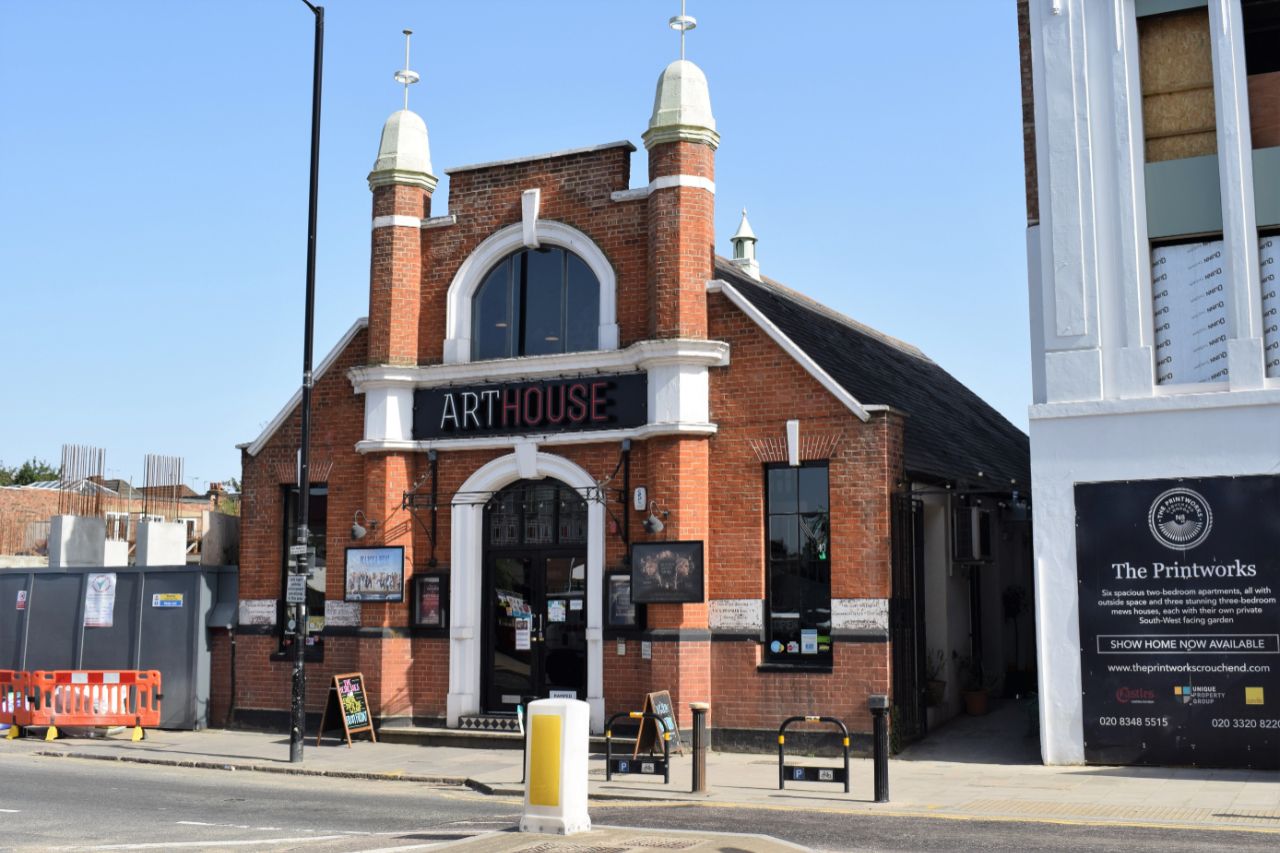 As mentioned in our previous blog outlining the review of Haringey’s Local Heritage List, the Forum has lobbed in a few extra suggestions for inclusion. In this post we’re looking at some of our nominations, local curios – the Earl Haig, currently sitting empty in the hands of property developers; the Arthouse Cinema, a local success story; and 2 Park Road, the second oldest building in town. You can see the full list of locally listed buildings in the earlier post, and further CENF nominations in the blog ‘Local Heritage List additions. 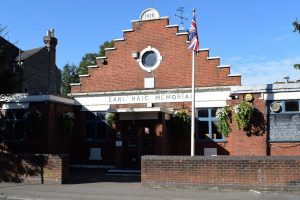 Built in 1928, opened in January 1929 for the Royal British Legion following a public subscription campaign. The Hall served as home for the local branch of the Legion until 2010 and became a pub in 2013. Throughout the last 90 years it has served as a popular community resource. It currently lies empty.

The Earl Haig is situated within the Crouch End Conservation Area. It has previously been designated an Asset of Community Value. The original building survives intact, with a club room side extension added in the 1970s.

Built under Councillor AG Shearing (described as ‘honorary architect’), the detached building is single storey, red brick, with a symmetrical front elevation of crow-stepped gable with round window and stone surrounds. A stone frieze across the front reads ‘Earl Haig Memorial’. At the apex of the roof is a square cupola with arches, above which is a weathervane topped with metalwork in the shape of a howitzer.

The building is set on Elder Avenue, a street within a Crouch End Conservation Area largely characterised by nineteenth century residential development of the 1890s. However, the CA is also notable for key later additions, mostly of the inter-war period, of which the Earl Haig is an example. The internal layout of the Hall survives intact, with stage, serving counter, and original interiors. 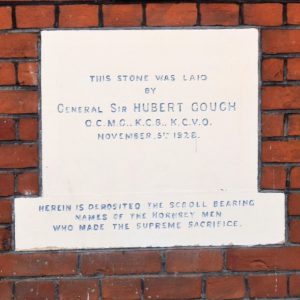 There are four foundation stones, inscribed:

The Earl Haig Memorial Hall has evidential value representing the period in Crouch End’s development when the town emerged as the civic centre of the Borough of Hornsey. It belongs alongside other mid-twentieth century civic buildings of merit such as the listed Town Hall group, and others compromised or lost, such as those along Tottenham Lane. It is notable that the Earl Haig and the art deco YMCA both opened in 1929, a year that also saw the first plans for the construction of a Town Hall in Crouch End.

The building has architectural interest and makes a valuable contribution to the urban form – in our view precisely the kind of characterful curio worth identifying locally and preserving. Loss of such a building would irreversibly harm local heritage. The Crouch End Conservation Area Appraisal (2010) identifies the hall as a positive contributor.

Historical and communal interest are key to the significance of the building, and are of greater significance than the architectural. The historical interest is in its commemoration of Earl Haig, commander-in-chief of the British Army during the First World War. Haig had died in January 1928, one year before the Hall’s opening. The foundation stones also associate the Hall with Sir Hubert Gough, commander of the British Fifth Army, and Sir Philip Sassoon, Haig’s private secretary.

Communal interest is evident in the commemorative role for ex-servicemen, marked by the stone recording a scroll bearing the names of the men of Hornsey killed during the First World War. This is further confirmed through the local fundraising campaign to build the Hall. The Earl Haig has played a continuing social and community function during its time as a British Legion HQ and since, and was for many decades the muster point for the remembrance day parade. 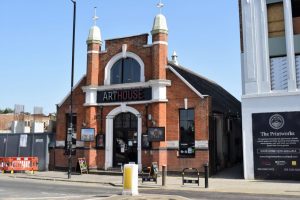 Constructed 1912 as a Salvation Army Citadel, later converted to leisure use, a venue, and in 2014 an independent community-centred art house cinema. The building is largely intact, its appearance improved and renovated by the cinema operator. It lies outside the Crouch End Conservation Area.

Single storey red brick structure with a gable elevation to main road. The central vertical section is in church or fortress form, with pillars rising to corner turrets with round caps. Arched doorway and first floor window with stone surrounds, a stucco frieze across the centre. Curious halo-like bands are mounted above the turrets (these are original features – further research necessary). Elsewhere plain windows, the rear of the building plainer still with slate roof. The parapet form is probably wartime repair after blitz damage, otherwise the hall appears as early photographs. The internal form is lost.

There are four foundation stones, inscribed: 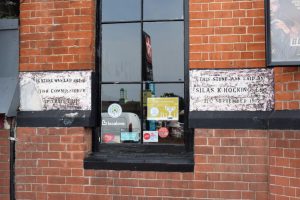 The Citadel is modest though possesses architectural interest as a highly representative example of the Salvation Army style which aimed to translate the objectives of the Army into bricks and mortar. The fortified gateway is symbolic of army militarism, and is flanked by unassuming vernacular red brick elements deliberately unadorned (and according to some sources representing the blood of Christ) (see Ray Oakley ‘To The Glory Of God’, 2011). Once again, this is a characterful curio well worth protecting.

The building has aesthetic interest as it makes a valuable contribution to the urban form, increasingly so through the fact of its survival. This stretch of Tottenham Lane was until recently characterised by early twentieth century buildings: the art deco YMCA was originally 1929, since rebuilt; the adjacent Hornsey Journal building is now façaded and converted to residential; and the art deco Kwik Fit garage has planning consent for demolition. In this setting, the scale, age and rarity of the Citadel/Arthouse therefore justifies local listing. It is important to note that the building is of course outside the Conservation Area.

Historical interest is evident through the association with Silas Kitto Hocking, a celebrity author of 50 best selling ‘pulp methodism’ novels from the 1870s to the 1910s, very famous in his day but now largely forgotten. One may assume that Hocking, by this period a Crouch End resident of Avenue Road, would have preached at the Citadel, equipping the soldiers of the Army with the moral certainties necessary to face the godless of Crouch End. By the seventies it had become the Hustler Snooker Hall. 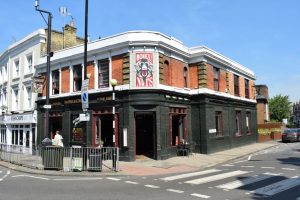 Part of a parcel of early development within Crouch End, a commercial building reputedly the second oldest in the area. 2 Park Road was a corn chandlers in 1852, later incorporating a Post Office at the north end (according to the 1870 OS map). By 1971 it was Grays Tyres garage, converted to restaurant use in 1996. The building is within the Crouch End Conservation Area.

Previously overlooked in the local listing of this area of 1850s development, 2 Park Road survives relatively intact, its architectural significance and importance to the urban form one of integrity and scale. The age of the building confers historical interest and illustrative value. The modest height of the building is of aesthetic interest, affording an important view from the Broadway which brings greenery and a vista of Alexandra Palace and transmitter mast into central Crouch End. The Crouch End CA Appraisal (2010) identifies it as a positive contributor. 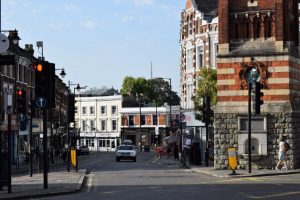