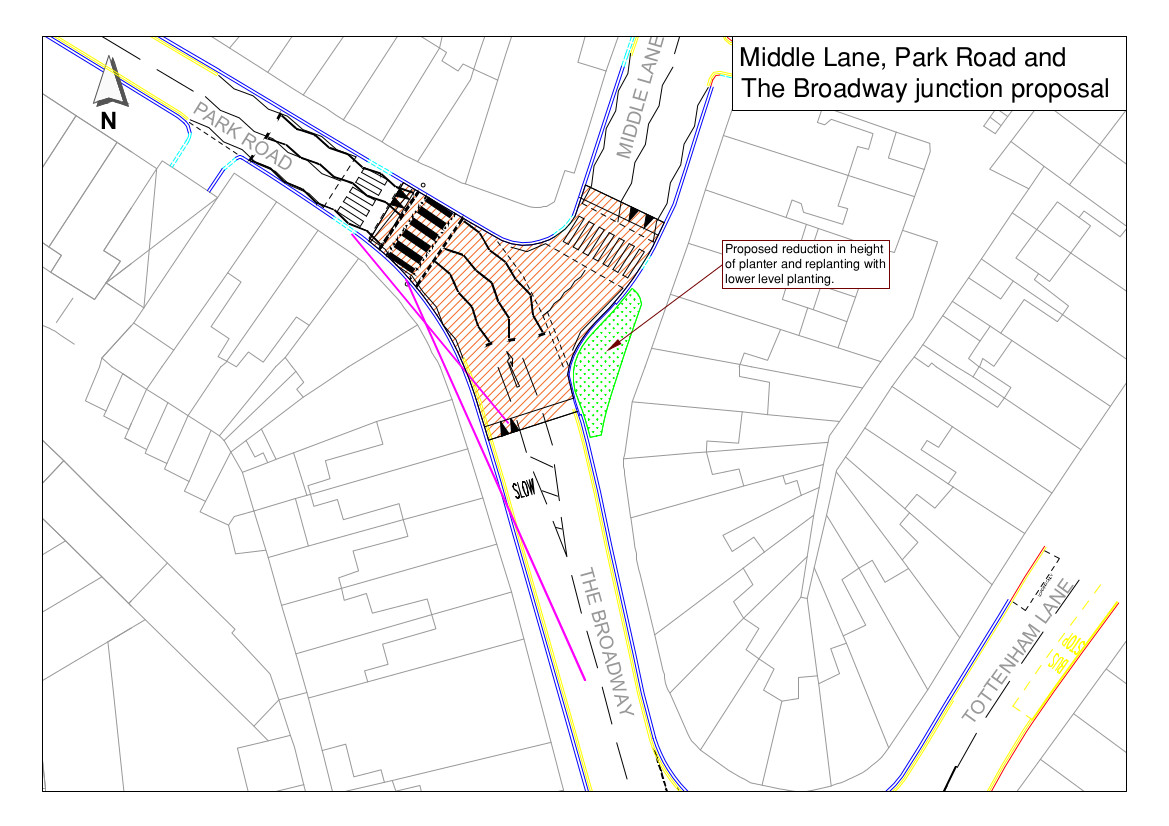 Toby Bowden has sent through updated drawings (23rd November) for the new proposals. (Zoom in on your phone, or right click on a computer and open image in a new tab, to see more detail)

The Neighbourhood Forum has had a note from the Haringey engineers who were kind enough to meet with us last week, and to revise their proposal in order to retain the threatened planters at the Broadway end of Middle Lane.

The note from Toby Bowden is below.
Well done to the petitioners, headed by Katrine Camillo of Niddle Noddle.
The revised proposal brings the added benefit of a planted bed at the junction of New Road and Park Road.

This is the full note from Toby Bowden , a senior engineer with Haringey:

The corridor of Crouch End Hill, The Broadway and Park Road was identified as having a high number of Personal Injury Accidents (PIA).  As a result of this Haringey commissioned a study of the corridor to help identify the causes and what measures could be taken to help mitigate against the causes.

The report identified the junction of Middle Lane, The Broadway and Park Road as one of the locations where improvements were needed to help reduce the number of PIAs and the potential for PIAs.

The proposal, which entails the introduction of a mini roundabout is shown in the attached plan and has the following benefits;

This proposal would have necessitated the removal of the planter on the corner of The Broadway and Middle Lane.

During the consultation period, which concluded on 5 November, Katrine Camillo started a petition to save the planter.  The petition received over 600 signatures and as a result of this we have developed an alternative proposal which includes;

This proposal improves pedestrian visibility at the junction whilst also maintaining the planter, albeit a lower version.  The New Road element of the proposal will allow for improved public realm and additional green space to Crouch End and counter balance any planting diversity that may be lost as a result of the modified planter.  A schematic version of the proposals is attached.  I will forward a more refined version of the proposals before the Christmas Market on 2 December.

Our next step will be to notify the area which was consulted to inform them of the change to the proposals.