“The School Street was to go-live on Monday 19 April 2021 but, unfortunately, this has been delayed by one week.  The reason for this is because not all of the signs were installed over the weekend by our contractor, as had been expected. “

The experimental School Street scheme will now come into effect on Monday 26 April 2021.

And notably …   “We will monitor the impact of the scheme in detail which includes ‘before’ and ‘after’ traffic counts in Elmfield Avenue, Hermiston Avenue and Rokesly Avenue. We look forward to receiving any feedback once fully in operation via www.haringey.gov.uk/parking-roads-and-travel/travel/smarter-travel/school-streets/have-your-say  “.

So now you know.

In Crouch End Rokesly school is the first to have school streets put in place, with a closure of Elmfield Avenue and Hermiston Avenue during school run times. Rokesly Avenue will remain open – and the W3 keeps rolling throughout. There’s another closure around Campsbourne school, and others may appear in future.

The idea is to encourage parents and children to walk, cycle or scoot to and from school by reducing the traffic outside at drop-off and pick-up times.

Claims are made about improving air quality, which is a significant problem at school run times. Though perhaps an improvement outside the school gate is a bit of a limited win, as the rest of your walk experiences the same pollution levels as usual (?). Let’s call it an incremental improvement.

Keep an eye out for the proper signage appearing. 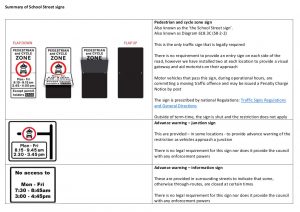