There’s growing concern about the Crouch End high street as a rash of ripped out shopfronts and new depressing, over-lit, poorly designed, cheapjack signage is driving a coach and horses through the conservation area and damaging the local economy. It’s not as if we wish ill on new enterprise, but the requirement to submit for planning is the same for everyone, as is the duty to protect the conservation area. You open a business, you have legal obligations.

The most grievous instance is, as many have told us, the overnight demolition of the traditional frontage of 144 Crouch Hill, the ex-Flashback Records shop (image above). Work has now stopped and we can report Haringey’s enforcement team are on the case, instructing the new owners to reinstate the traditional shopfront. They have until the end of June to submit a planning application. 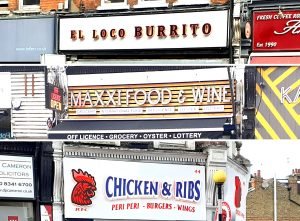 Quite a few of the objectionable and non-compliant frontages are attached to new fast food and convenience stores, not least along Topsfield and Broadway Parades where the wen of take-aways, bookmakers, charity shops, and beauty parlours has produced an unattractive and economically depressing spectacle. It feels like a concerted attack — to walk here and still view Crouch End as some kind of west-of-borough El Dorado is increasingly myopic. Notably, an upwardly mobile neighbouring Muswell Hill continues to attract the kind of retail investment rarely seen here. With a comparison retail sector already on the floor town centre improvements are long overdue — improvements that begin with protecting what we have and, we strongly suggest, are secured in a plan to deliver a revitalised, visitor-centred, greened, public realm.

So even as we speak, two new additions to the workload for Haringey’s planning enforcement dept., both Tottenham Lane:

Of course, 42 and 44 Topsfield are directly opposite the grade II* listed Queens, blighting the setting. We need to make the most of such heritage assets we have, not drown them in tat.

As many as ten shops across Crouch End town centre are currently facing enforcement action. 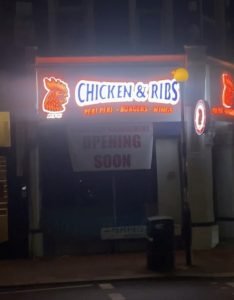