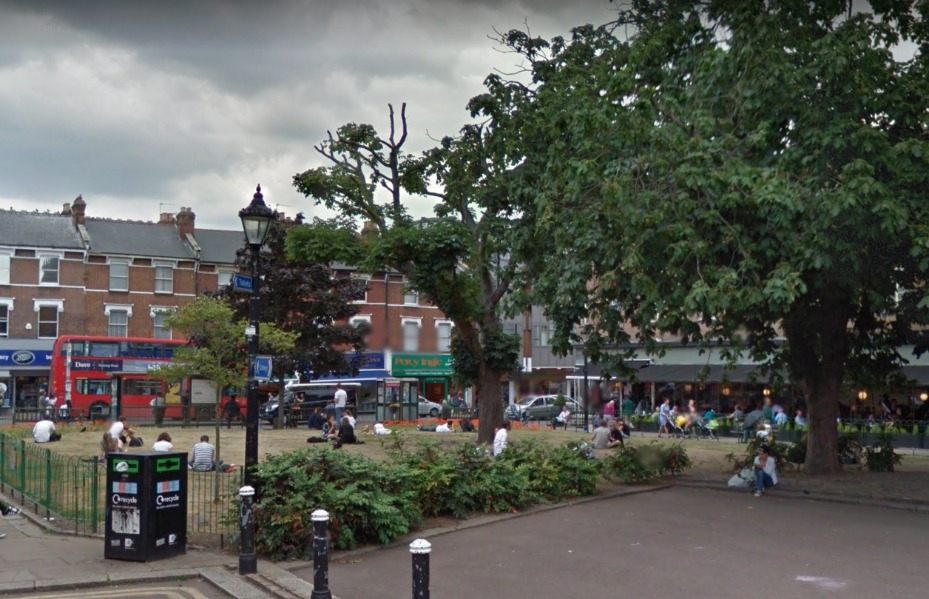 (Above: the other horse chestnut, centre, distressed, just prior to felling in 2016. The tree under current discussion is to the right. Credit:google street view)

Much local anguish during the last few weeks over the fate of the diseased horse chestnut on the square. Rightly so, these trees are important.

In fact it was in response to three separate aboricultural reports about the condition of the tree, not least the likelihood of falling branches, the HTH developer (FEC) and their contractors (Ardmore) had been forced into a proposal to remove the tree and replace with, hopefully, a new semi-mature specimen. …. cue understandable but rather mistaken accusations of uncaring developers.

Consequently, as a sop to the objectors a plan B is now proposed, which will unavoidably see a tree ‘harshly and unsympathetically’ cut back. It may last a few more years and be better PR, but the sight won’t be pretty and one presumes the ability of the tree to sequester carbon will be much reduced. Be careful what you ask for.

It’s worth noting this is all an exact repeat performance of the fate of the other horse chestnut on the green which suffered the same blight, was itself pruned back in 2013 (you can see the result above), before succumbing and felling just 3 years later in 2016. As Haringey’s tree officer said “Horse chestnut trees do not respond well to decay, which can quickly spread within its wood presenting a risk of further branch loss.”.

The mature trees on the green are extremely important local features and the Forum has followed the soft and hard landscaping plans across the development very closely – trusting that the surviving sycamore and red maple on the green, and the various ash, sycamore and pear at the rear are retained as healthy specimens. We hope that, eventually, we’ll get that replacement too.

We received the following communication from FEC a few days ago –

Ardmore, together with FEC, has taken all necessary steps to carefully consider the ecological and local amenity value of the horse chestnut tree on Hornsey Town Hall Square. Ardmore can report that the proposal to fell the tree has been withdrawn in favour of retaining it in the short-to-medium term by pruning the crown.

Following two reports by an independent environmental consultant, Phlorum, who surveyed the tree in January 2019 and February 2021, Ardmore submitted an application to fell the tree. This was in line with the arboriculturist’s recommendation to remove and replace it with a new tree, such as a Red Oak, which would have greater potential longevity, remove the potential risk of future branch failure and ensure the safety of the public using the Town Hall Square.

We have since reviewed the application to fell the tree with the council’s arboriculturist and agreed to submit an alternative proposal to retain the tree and prolong its life. The tree’s diseased area will be initially removed, to minimise the risk to the public and monitored. The tree reports indicate that further pruning is likely to be required due to the condition of the tree. It should be noted that the pruning of the tree will impact both the visual appearance and its environmental benefit, however, if well maintained, the tree could potentially survive a further ten years.

Ardmore and FEC will provide further information to the community and its local stakeholders once the pruning specifications are confirmed.